This Jack Skellington Funko Pop! gives the pumpkin king a dapper new look - Inside the Magic 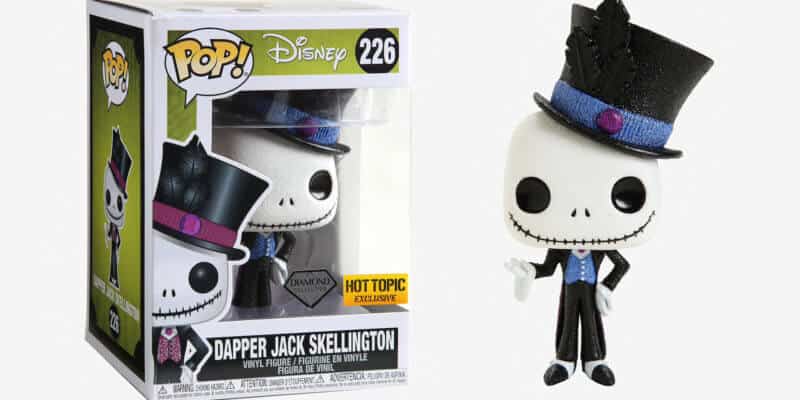 What Disney fan doesn’t love the cult classic film following the misadventures of Jack Skellington? And it seems Funko Pop! wanted to re-capture this pumpkin king in fresh new threads with this all-new Dapper Diamond Collection Pop figure and we want them all!

This Funko The Nightmare Before Christmas Diamond Collection Pop! is exclusive to Hot Topic. The Pop! figure features the infamous character in dapper clothes of a suit and top hat with glittery accents. The figure stands at 3 3/4″ tall and is available today for $14.50.

This figure is so stylish and shiny; it’ll make you forget all about the idea of a sequel to the original “The Nightmare Before Christmas.” As we shared last month, Disney is said to be in talks to create a live-action/follow-up to the beloved film. However, at this time it’s not known what Disney really has in-store for the film and the famous character.

Get your own version of this Jack Skellington Funko Pop! here.

If this Jack Skellington Pop! figure isn’t enough Funko for you, the company also just recently released its King Triton Funko Pop! in celebration of the 30th anniversary of Disney’s “The Little Mermaid.”

The figure is almost a perfect replica of the original character from the film as it features the king’s mighty mermaid tail, his golden trident in hand, golden cuffs, and his brilliant and bright golden crown, signifying his rule over Atlantica.

To get your own King Triton Funko Pop!, be sure to purchase it here. And be sure to act fast as this Pop! was recently discounted to $18.32. Get your own while supplies last.

Will you be buying one of these Dapper Jack Skelton Funko Pop! figures? Let us know in the comments below!