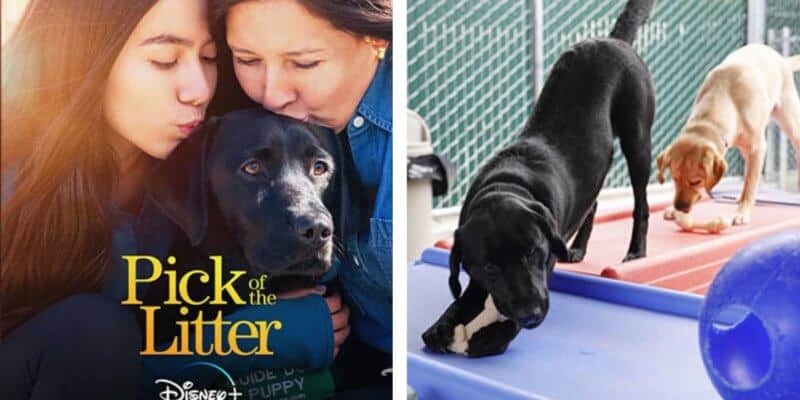 Another new Disney+ Original series has officially made its debut today, December 20, 2020, on the streaming service and it is the next MUST watch series!

Pick of the Litter features several lovable stars that will just make your heart melt. Of course, I am referring to pups!

The four-legged friends, Paco, Pacino, Tulane, Raffi, Amara, and Tartan are all pups in training to become Guide Dogs for the Blind.

The brand-new docu-series from Disney+ and ABC Studios will take viewers on an inspiring journey as these four-legged friends train from “family pup to the ultimate canine career“.

Pick of the Litter will be filled with lots of suspense and emotion, but in the end, it will be one of the most aspiring and good-feeling series you will ever watch.

Pick of the Litter is executive produced by Dana Nachman and Don Hardy. Both Nachman and Hardy first explored the guide dog world back in 2018 thanks to their documentary by the same name.

The new docu-series will introduce pups named Paco, Pacino, Tulane, Raffi, Amara, and Tartan who are all about 15–17 months old, each with their own unique and distinct personalities.

This group of pups have been living with a special group of families. When Pick of the Litter begins, the families are about to find out whether or not their dogs have passed initial training and acquired the skills to return as official Guide Dogs for the Blind (GDB), in which they can then begin formal training.

The amount of training each pup has to go through is intense, but necessary in order to succeed as a guide dog. Benninger estimates that about 50 people are part of the process and that some breeds are better suited than others. Benninger said that a majority of GDB’s dogs are Labrador Retrievers, Golden Retrievers, and a cross of the two.

“Only the best of the best of the best actually can be a guide dog, and that’s because guide work is the most challenging of all service work,” GDB CEO Chris Benninger states. In order to be a successful guide dog, the pup must be able to focus and not become easily distracted and this is important because “The dog has to disobey a command if it believes that command is going to put their person in harm’s way,” Benninger said.

In fact, only 300 out of every 800 dogs born into the Guide Dogs for the Blind’s program every year eventually finish training and become guide dogs.

You can follow along on the journey of Paco, Pacino, Tulane, Raffi, Amara, and Tartan with each new episode of Pick of the Litter, airing every Friday on Disney+.

Will you be watching Disney+’s Pick of the Litter? Let us know in the comments.