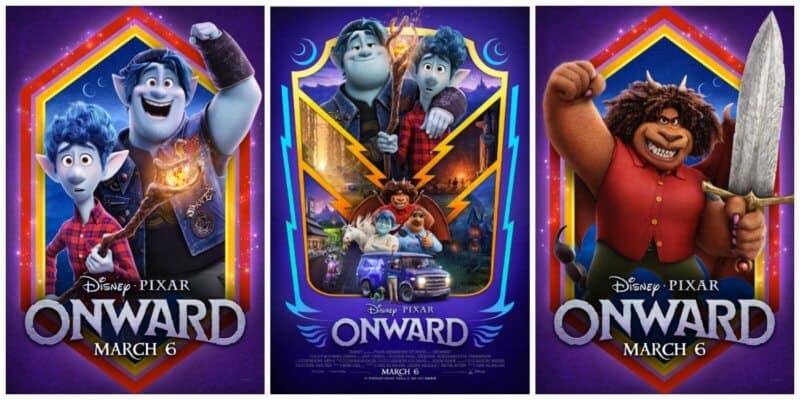 The Quest Beginneth! Ian & Barley’s one wish is to spend another day with their Dad. On March 6, 2020, they will get their wish. Well… sort of! Something goes wrong as they cast a Visitation Spell and they must go on a trek to fix it! Is there magic left in the world to remedy the problem? The new film stars Tom Holland (of Spiderman fame), Chris Pratt (our one and only Starlord of Guardians of the Galaxy), Julia Louis-Dreyfus (Seinfeld) and Octavia Spencer (Hidden Figures, The Help).  Onward will be directed by Dan Scanlon (Monsters University) who said that Onward was inspired by his own relationship with his brother.

This looks to be a fabulous original story coming from Disney Pixar, and we know it’s something to be excited about. The seemingly coming of age story is classically Disney, while the addition of modern stars is reminiscent of the Golden Age of Disney in the 1990s. The animation looks crisp, the universe explored, and the topics new yet familiar. It’s everything we’ve been asking for.

Pixar and Santa collaborated on Twitter to gift us new character posters for the upcoming fantasy creature film. Check out the awesome (dare I say rock-inspired?) posters featuring Ian and Barley, mom Laurel, the Manticore, “Corey,” and the animalistic police corps. Not only did we get some posters, but also news that additional cast has been announced. Ali Wong, Lena Waithe, and Mel Rodriguez will join the Onward talent team.

While we already have seen the first trailer for Onward, getting more footage and a closer look at the storyline is something we love at Inside the Magic! While the Onward character posters dropped recently, today’s gift was the second official trailer. Found on Pixar’s Youtube channel, we get to see more characters and possible where the brother may be headed. The quest beginneth when Onward arrives in theaters on March 6, 2020. Will you tag along with the brothers? I sure want to see the inside of that rad van!

Will you be in the audience on opening day? Be sure to leave a comment about how you think the brothers will solve their problems!