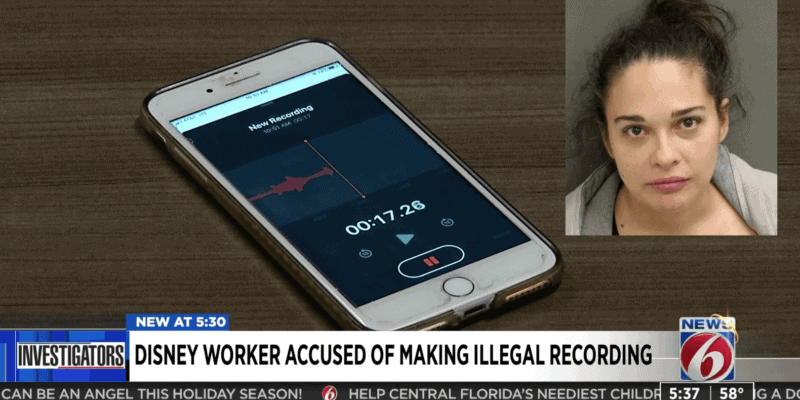 Back in May 2019, it was reported that a former Walt Disney World employee was accused of stealing over $7,000 worth of costumes from Haunted Mansion in the Magic Kingdom.

The Orange County Sheriff’s Office reported that Patrick Spikes, 24, was arrested and charged with burglary, grand theft, and dealing in stolen property. Spikes entered a restricted area of Disney and stole over $7,000 in items and resold them.

And now, Click Orlando is reporting that a Walt Disney World employee has made an illegal audio recording while she was in an interview with Disney security officials during her questioning about the Spikes thefts.

Reese, who is a former employee of ESPN Club restaurant at Disney’s Boardwalk Resort, was interviewed about the thefts from the company by two Disney security investigators back in March. The interview reportedly took place in an office within the ESPN Club restaurant where a human resources representative and a union representative were also present.

According to the court records, Reese was interviewed by the Disney security officials about entering areas on Disney property that she was not assigned to and removing certain items.

During the interview, Reese admitted to entering the parks and removing a ride manual, but she claimed that she, in fact, had permission to do so by an ‘unknown employee’ known only as “Matt,” according to a report.

At this time, Reese has not been charged with any theft-related crimes and is not under investigation for theft at this time.

Alicia Reese, who, according to authorities, used a cell phone to record her interview illegally, had later uploaded the recording to the online cloud storage service, in which she then shared a copy of the audio recording with the accused theft, Patrick Spikes.

A confidential source had actually tipped off a Disney Security investigator about the recording.

The Florida law stated that it is illegal to make an audio recording during the interview unless all parties have given prior consent, in which this case, they did not because Reese had hid it from everyone. Though, the Florida Supreme Court found an exception to the Florida law, which only applies “if the parties do not have a reasonable expectation of privacy, such as during a public meeting”.

Reese has been charged with an illegal interception of oral communications, which is a felony punishable by up to five years in prison.

Reese and Spikes have pleaded not guilty to the charges against them.

According to Click Orlando, “Reese admitted to an Orange County Sheriff’s detective that she had made a recording ‘that the people in the meeting were not aware of,’ according to an arrest report.”

“The interview took place in an office at the (Disney) restaurant, and was not a public meeting,” the detective wrote in the report.

“At no time was there an expressed prohibition on recording this meeting nor did any of the attendees exhibit an expectation of privacy,” attorney David Bigney recently wrote in a motion seeking to dismiss the criminal charges against his client.

Currently, there is a court hearing on the defense’s motion scheduled for next month.