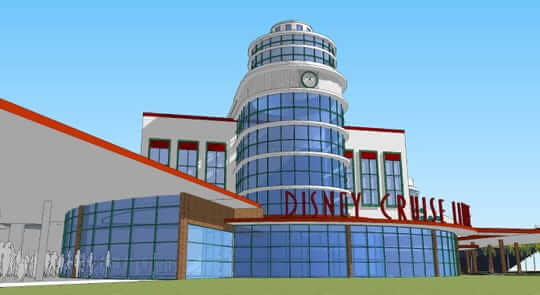 Disney Cruise Line plans to close one of the terminals at Port Canaveral in Florida in 2020. Here are all the details.

Here are the details of the work that is scheduled to occur on Cruise Terminal 8 while it is closed:

The Project will include construction, renovation and equipping of Cruise Terminal 8 and Cruise Terminal 10, including terminal and berth improvements and a new passenger boarding bridge. The Terminal improvements include a new luggage screening building, renovation of the first and second floor, reconfiguring seating area and check-in counters, and site, access, IT and electrical enhancements. The berth improvements include structural and deck enhancements and mooring fixtures.

Commissioners will be meeting this Wednesday to vote on the proposed work on Terminal 8, so we will update Inside the Magic, should any more information come from that meeting.

Take a look at the concept art for the upgraded Cruise Terminal 8 below:

Port Canaveral is by far one of the most popular Disney Cruise Line ports. It is the closest port to Walt Disney World, thus making it a very popular cruise port for first-time cruisers to sail from, and a popular port for those who plan a Land and Sea vacation, in which guests stay at Walt Disney World before or after their Disney Cruise. Given how busy this port is every week, it’s no surprise that Disney wants to give its popular terminal an upgrade.

Are you excited for Cruise Terminal 8 to be renovated? Let us know in the comments!