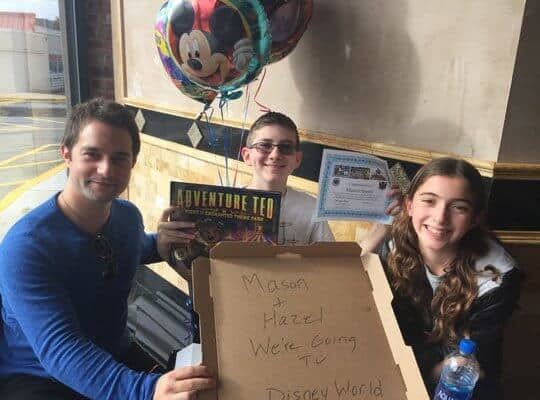 In the Township of Wayne, New Jersey, the Childhood Cancer Society, a local non-profit organization,  chose 5 deserving families to provide an all-expenses-paid trip to the Walt Disney World Resort.

The Childhood Cancer Society was started by Thomas Head,  a Wayne Township native. Head, who is just 31-years old, started the company using funds from a commercial he shot as a child.

The inspiration for the organization was birthed from a common thread Head had with these families. You see, Thomas experienced childhood illness firsthand. During his childhood and through adolescence, Head had a rare disorder, known as idiopathic thrombocytopenic purpura, in which his blood did not properly clot, causing an unusually low platelet count. He has since overcome the condition, but the memory of his time in hospitals and treatments was not forgotten.

Using the money from the aforementioned commercial, at just 16, Head purchased video games for pediatric cancer patients at Hackensack University Medical Center. “I liked how it felt,” he said. “I noticed right away that they were very happy to receive the games and have something to distract them during treatment. I knew I wanted to do more.” And that’s how the Childhood Cancer Society came to be.

This year, 5 families were chosen to receive a magical trip to central Florida. Among the kids that were able to enjoy this all-expenses trip to Disney, was Mason Sneed, a 13-year-old, 7th grader from Wayne.

“There are no words I can say to describe how grateful I am to go on this trip,” said Mason. His family, including his mother and younger sister, were among the five families from North Jersey and New York City that the Childhood Cancer Society provided this magical trip to Orlando.

Mason was diagnosed with acute lymphoblastic leukemia, a rare blood and bone marrow cancer, when he was 5 years old. He underwent aggressive treatment for almost four years, and he has been cancer-free since 2015.

The Society threw a big party on November 10th to let the families know they had been selected for the trip! However, Mason was unable to make the event. So, Head surprised Mason at a local pizzeria at a later date.

At the restaurant, Head handed him a pizza box with a message written in Magic Marker on its inside that told Mason he was going to Disney World. “I instantly thought to myself, ‘Is this a dream?’ ” Mason said. “That’s how blown away I was.”

Can’t believe it’s already been a week since we went to @waltdisneyworld with @angelinasarmynj! Thanks again to @gktwvillage!

A post shared by Childhood Cancer Society (@childhoodcancersociety) on Mar 10, 2019 at 12:29pm PDT

Mason’s mom, Jessica Erwood, said she was “incredibly thankful” for the society’s generosity. Erwood is a 45, a single mom who had to quit her job as a preschool aide to care for her son when he was ill.  “It’s a celebration that I could never provide for my children,” Jessica added.

We hope Mason, his mom Jessica, and his younger sister have the most magical time during this very special trip to the most magical place on earth! And of course, we wish the same for the other families that will be able to enjoy the pixie dust from the Childhood Cancer Society.

ChEARs to Mr. Head for making a way to provide magic to these special families!