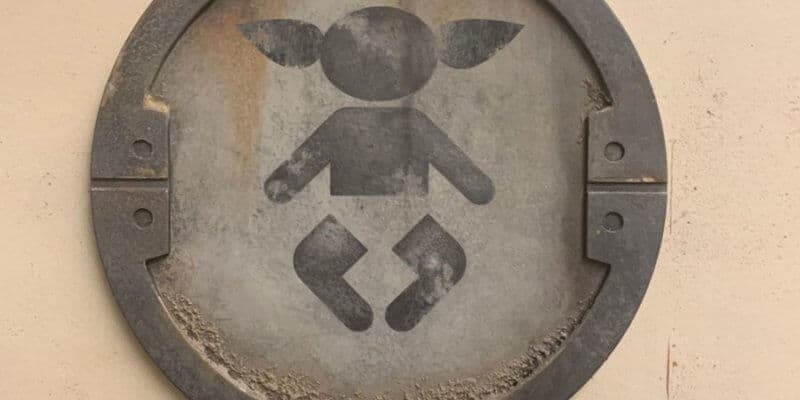 Sorry to disappoint you, Mandalorian fans. It turns out the beloved Child — or Baby Yoda as we all know him — wasn’t actually added to Disneyland’s Star Wars: Galaxy’s Edge at all. Disney officials say it was a hoax.

The adorable Baby Yoda — known formally as The Child — is the latest and cutest character in the Star Wars universe. The adorable little creature (who is actually 50 years old, believe it or not) was introduced in the first episode of the Disney+ series The Mandalorian, and fans of Star Wars, as well as everyone on the internet, have been going nuts over just how lovable Baby Yoda is. So when we heard that Disney had possibly added Baby Yoda to guest restrooms in Star Wars: Galaxy’s Edge — the Star Wars-themed land in Disneyland park in Southern California — we knew we had to share.

Last week, a Twitter user and former Disney Creative Entertainment employee Sam Carter shared a pretty believable photo on Twitter along with a message that asked why nobody was talking about the Baby Yoda changing signage in Galaxy’s Edge.

um guys, why is nobody talking about the baby changing signage in Galaxy's Edge? pic.twitter.com/RkkAVaF4km

But as it turns out, Disney didn’t actually add what appeared to be Yoda ears onto a baby icon on the changing tables in the Galaxy’s Edge restrooms. In fact, it was all a hoax that took Twitter by storm and sent the internet on a Baby Yoda frenzy.

“I work in the experience design/creative industry, and was recently at Disneyland’s Galaxy’s Edge with my kids,” Carter told Fox News. “While in the land’s restroom I noticed the detail of the baby changing icon and wondered why the design wasn’t ‘The Child’ from [The] Mandolorian, it totally should be. The next day I had a few minutes and whipped up what it would look like and wanted to share it. Never thought it would be believed or blow up like that, but if anything, hopefully, Imagineering ends up actually changing the sign to that. Baby Yoda is the biggest star in the Galaxy right now, I think it would make a lot of people happy to see that.”

A Walt Disney World representative also confirmed with Fox News that neither Disneyland nor Disney World had changed its baby-changing signage.

Still, even though we know for a fact that Baby Yoda hasn’t been added to the bathrooms at Disneyland or Walt Disney World, we’re still hoping that the viral image persuades Disney to make the change. We’ve been seeing Baby Yoda merchandise become more and more available over the past couple of weeks, but giving the adorable little  Star Wars creature a more permanent presence in the theme parks would be pretty fitting and greatly appreciated. We’re not sure what Disney and Lucasfilm have planned for us in terms of the Yoda species, but we know something exciting is coming and we’re excited to find out.

What do you think? Did you believe the Baby Yoda changing stations were real? Do you hope Disney gives The Child a permanent presence in Galaxy’s Edge? Let us know in the comments!