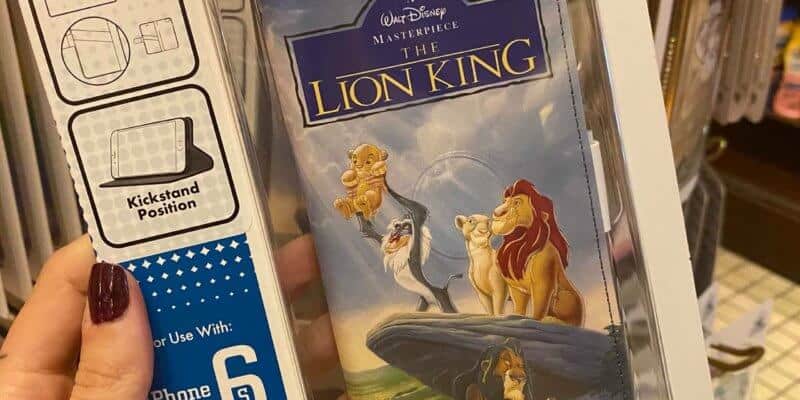 Disney has just released these adorable new cell phone cases from D-Tech—some that will have you reliving the very first time you got to watch an animated Disney feature film on video!

That’s because Disney is throwing it way back with these Disney animated film-inspired phone cases that feature timeless beloved Disney movies, some of which are also inspired by the VHS cassettes we once bought (or rented) back in the day before DVDs and Blu-Ray Discs became the way of Disney home entertainment.

Don’t worry—we won’t ask for a show of hands of fans who remember standing in line at Blockbuster to rent classic Disney or Pixar favorites like Sleeping Beauty, Lady and the Tramp, Toy Story, The Emperor’s New Groove, the original versions of The Jungle Book and Aladdin and Snow White and the Seven Dwarfs, etc.

And we aren’t mentioning ages here, but let’s just say that some of us remember a time when VHS cassettes were the only way to enjoy our favorite Disney characters outside of the Disney theme parks (and waiting while the cassettes were rewinding or fast-forwarding seemed like an eternity…probably because it was!)

Who could have imagined that one day, we’d be able to stream all of our favorite Disney films at home—without a VHS cassette or cable–on a service called Disney+ that would literally bring the magic of Disney original movies, as well as other Disney, Pixar, Star Wars and Marvel content right into our homes for us to watch anytime? Disney+ will even make it possible to watch our favorite Disney Channel original series anytime! (Once upon a time, “stream” just meant a small, gently flowing, trailing body of water! If you remember those days, shout out in the comments section below this post!)

We found these cases at the Emporium at the Disneyland Resort in California, but they are also available at other select merchandise retail locations throughout Disneyland and the Walt Disney World Resort in Florida.

Each case has a built-in card slot inside, perfect for debit and credit cards, I.D. and more. The VHS cassette-inspired cases retail for $29.99 each, and the classic film-inspired (non-VHS) cases sell for $24.99. Cases fit a variety of smartphone models, including the Apple iPhone 6, 7 and 8, iPhone XS and XS Max.

Don’t forget to subscribe to the Disney+ streaming service, set to launch next week on November 12, so you can watch all the Disney classics you want, whenever you want!

Do you already have a Disney-inspired phone case? Show us your case in the comments below (and don’t forget to send a shout if you remember those wonder years of Disney classics on VHS cassettes!)