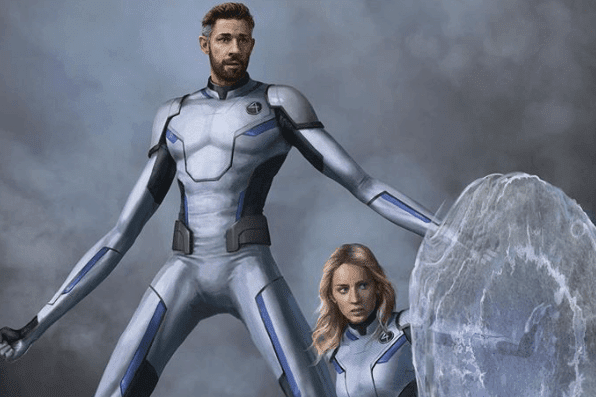 Well, that’s what one fan artist has imagined anyway.

Artist Rob Brunette, a fan of the Fantastic 4, Avengers: Endgame, and the Marvel Universe as a whole, has taken a “reimaginative” approach to actor John Krasinski and his wife Emily Blunt. He has used his creative genius to launch the Hollywood power couple into the Marvel Cinematic Universe.

Brunette drew the long time delightfully hilarious and incomparable John Krasinski as Mr. Fantastic, and he gave the role of Invisible Woman to Krasinski’s wife of nine years, Emily Blunt, who played the lead role in Mary Poppins Returns that hit the box office last December.

For this week’s Fan Art Friday I did a suit variation on the Fantastic 4 piece I did. I based this suit on the black and white outfit variations in the comics. I also used the Endgame suits as inspiration to bring them into the MCU a bit more. . . . . . . . . . . #fantastic4 #johnkrasinski #emilyblunt #mrfantastic #invisiblewoman #fanart #fanartfriday #conceptart #conceptartist #mcu #marvel #marvelfanart #comicart #comics #artoftheday #artistsoninstagram

Brunette, like many fans of the MCU, has been anticipating the introduction of the Fantastic Four into the Universe, especially since the characters have all returned “home” to Marvel Studios where they belong. But at this time, when Marvel’s “First Family” will finally make their debut is yet to be seen.

So while they wait, many fans have made their own suggestions and predictions about who they’d like to see cast in the roles of the First Family. It’s no surprise that Krasinski and Blunt are on the tip top of many fans’ wish lists; after all, it’s John Krasinski and Emily Blunt. (Hey, John Krasinski would be enough for some of us!)

“Oh yeah, the Fantastic Four. I would love that,” Krasinski has said before. “I mean listen, I’m still getting into the whole superhero thing.”

Who better for the role of Mr. Fantastic than the always-fantastic Krasinski who first won his way into our hearts by winning his way into on screen girlfriend Pam Beasley’s heart as the always witty, always debonair Jim Halpert on the uber-popular and crazy successful sitcom, The Office, which aired on NBC from spring 2005 to summer 2013? Even within the storyline of The Office, Krasinski showcased his versatility as the near-perfect boyfriend and later husband to Pam while simultaneously working a full-time job as Dwight’s arch-nemesis. He went on to work on a myriad of other projects, including A Quiet Place, the film Krasinski wrote, directed, and starred in alongside Blunt, which debuted at the box office on April 6, 2018.

Perhaps Marvel should listen to the pleas of its fans, many of whom have no complaints at the thought of Krasinski’s very first role within the Disney empire being that of Marvel’s Mr. Fantastic. Because after all, he’s pretty fantastic. (Wait, I’ve said that already, haven’t I?)

What do you think? Is this artwork just “pie in the sky,” or could John Krasinski pull off the role of Mr. Fantastic? Let us know in the comments section below.