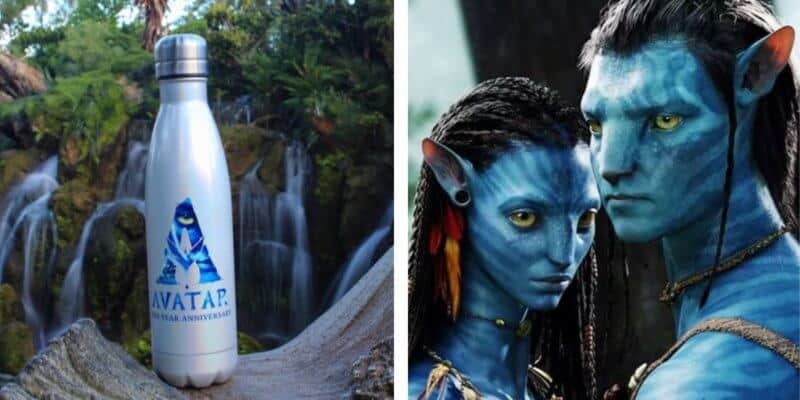 Can you believe it has been almost a decade since we were first brought into the amazing and breathtaking world of Pandora.

That’s right — It’s been nearly 10 years since Avatar hit theatres and we were fully immersed into the beautiful landscape, which to this day, continues to inspire and touch the hearts of all ages.

At Walt Disney World, Panda — The World of Avatar has been open for over two years and is still extremely popular, serving several Disney guests each and every day.

Walt Disney World is celebrating the anniversary of Avatar with some brand new merchandise! And, thanks to Disney Parks Blog, we have our first look.

Check our some of the 10th anniversary merchandise available at Disney’s Animal Kingdom in honor of Avatar.

This adult t-shirt features the Avatar logo as well as the words “Ten Year Anniversary” across the front in bold blue lettering.

Check out the new commemorative stainless steel water bottle. This item features the Avatar logo, displayed in a beautiful way, along with the words “Avatar” and “Ten Year Anniversary” across the front.

Stunning. This lithograph features a breathtaking scene from the film, Avatar, in bright, bold, and beautiful colors. This would make for a great addition to your living room, bedroom, or office!

All three of these Avatar 10 year anniversary items will be available at Windtraders and Island Mercantile in Disney’s Animal Kingdom.

If you want to visit Pandora — The World of Avatar at Disney’s Animal Kingdom, but aren’t sure where to being planning, then be sure to reach out to our friends, the Authorized Disney Vacation Planners, who will be there with you every step of the way of planning your next magical vacation. Click here for a free, no-obligation vacation quote from the Authorized Disney Vacation Planners at Academy Travel!

Which one of these Avatar 10 year anniversary items do you want to get a hold of? Let us know in the comments.