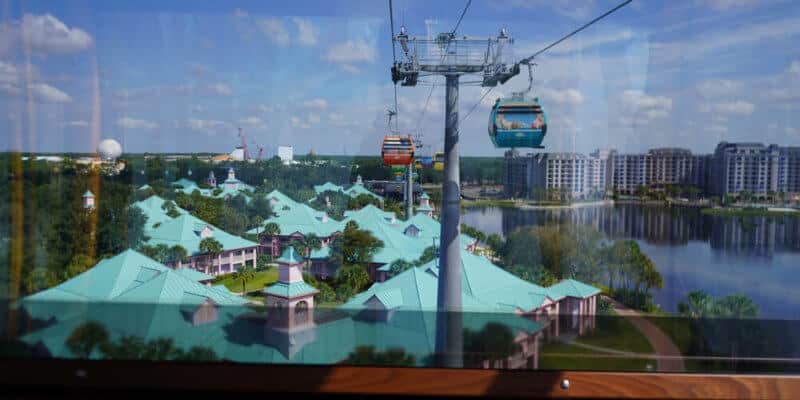 In new 911 tapes recovered in request by the Orlando Sentinel from Reedy Creek (a governing system over Walt Disney World), harsh conditions some guests faced during the malfunction of the Disney Skyliner on October 5 have come to light. Issues concerning a girl frantically seeking help for her epileptic mother and a man trying to help his wife as she went in and out of consciousness.

“It’s been 20 minutes up here!” she screams. “Please. I’m begging you!” says an 11-year-old Lakeland girl on the phone with 911 operators looking for anyone to rescue her epileptic mother. According to Orlando Sentinel, the girl had been journeying to Epcot when the gondola stopped over Disney’s Boardwalk.

“We’re getting help to you,” says the dispatcher, in an attempt to calm the child. In response, the child replies, “Get her out of here as fast as you can, people! I am going to sue Disney for this!”

Another call reveals a frantic man seeking aid for his wife who was going in and out of consciousness in the gondola.

“My wife just passed out and came back … I’m just getting really concerned now, it’s near two hours … she’s breathing, she’s just in a lot of pain … oh gosh, she’s burning up,” the man tells 911. “This is bad. She’s not going to last long.”

According to Orlando Sentinel, the 32-year-old woman can be heard crying in the background while her husband tells the dispatcher that she has a heart condition and has been on medication.

One other rider’s 911 tape reveals concern for his 88-year-old mother who he said was having difficulty with the heat of the cabin. “She’s in a wheelchair, she’s stuck here, and she’s 88 and she’s getting overheated,” said the man.

According to Orlando Sentinel, the dispatcher told the man that technicians were working on bringing the power back. However, he said this wasn’t enough for him and his mother.

“We don’t want it running, we want off right now,” he says. “All they need to do is pry the doors open. I could probably do it myself. I’m sure a couple of fireman could easily do it.”

At this time, Disney has not commented on why the Disney Skyliner malfunctioned on the evening of October 5.

Following the incident, the system underwent testing prior to its reopening. During the test phase, Disney told WESH 2 News that the gondola system was being tested until it was deemed suitable for guests. The system is currently in normal operations at Walt Disney World.