Disney Skyliner resumes operations at Disney World, but more work is to come - Inside the Magic 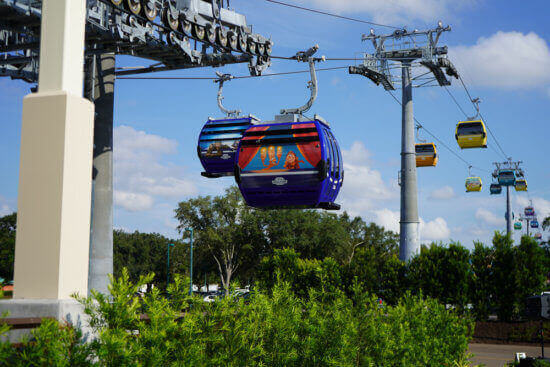 After being down for a full week at Walt Disney World, the Disney Skyliner transportation system has officially resumed operations as of Monday, October 14. However, the system will only be operating for a limited time as it still requires more updates, which will require the system to temporarily close again later this week.

Beginning today, Guests may travel aboard Disney Skyliner from 8 a.m. to 10:30 p.m. However, system updates later this week will result in the following modified operating hours for Oct. 16-18:

The suspended cable propelled mode of transportation first went down Saturday, October 5, after the system experienced what Disney said to have been “unexpected downtime.” Downtime which left some riders of the cable car system suspended in the air over the resort for three hours.

Disney has not officially confirmed the reason as to why the Skyliner malfunctioned. The only comments the company made on the system’s downtime on the late Saturday evening were in reference to reports it was due to a power outage, which the company says was not the cause.

Immediately following the incident, the company closed the Skyliner to guests. Beginning early last week, the company ran the Skyliner in a “test mode,” moving the gondolas around the resort with no guests inside. Disney commented on the testing of the system, saying: “the gondola system is being tested until it is deemed suitable for guests.”

The system, which takes guests from Disney’s many resort hotels to Disney’s Hollywood Studios and Epcot, include Disney’s Caribbean Beach Resort, Disney’s Riviera Resort, Disney’s Pop Century Resort, and Disney’s Art of Animation Resort. The system just recently made its debut at Walt Disney World only a few weeks ago on September 29.

Will you be taking the Disney Skyliner Gondola System on your next visit to Walt Disney World? Let us know in the comments!

Comments Off on Disney Skyliner resumes operations at Disney World, but more work is to come