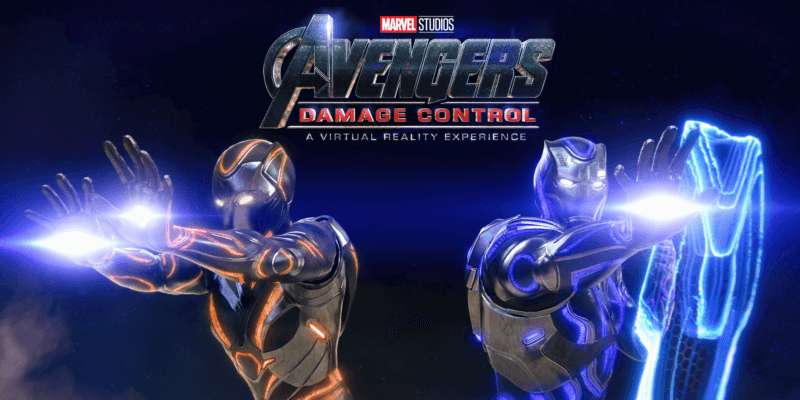 Marvel fans–get ready for the all-new VR experience Avengers: Damage Control, which will let you step into the Marvel Cinematic Universe! Marvel Studios and ILMxLab have just come together to announce the limited time running VR experience coming to The Void and upon opening, it will let guests suit up next to their favorite heroes.

As we all know, “Avengers: Endgame” shattered the world box-office record and has since continued to make the Marvel Cinematic Universe a trailblazing film series around the world. So what better than to make a VR experienced based entirely off these galaxy-altering characters?

Avengers: Damage Control will let fans step into the MCU for the very first time and team up alongside Earth’s Mightiest Heroes! Fans will be enlisted by Shuri (Letitia Wright) to test her latest prototype design: Emergency Response Suits, created with a proprietary blend of Wakandan and Stark Industries technology.

However, when sinister forces intervene, guests at the Wakandan Outreach Centers will soon find themselves recruited into action, exploring iconic locations across the MCU. As part of the experience, guests will get to fight side by side with real Avengers. Some of which who are set to make appearances in the experience include Doctor Strange (Benedict Cumberbatch), Ant-Man (Paul Rudd), the Wasp (Evangeline Lilly), and more.

“We’re always looking for new stories and corners of the universe for our characters to explore. Now, after more than a decade of amazing support, we are excited to give fans the same opportunity: to be a part of the Marvel Cinematic Universe,” said Kevin Feige, President of Marvel Studios. “Expanding how people can experience the MCU is something we’re always trying to do, and in Avengers: Damage Control, we wanted to give fans the chance to suit up alongside some their favorite heroes for the first time ever.”

This new experience will operate similarly to ILMxLAB’s previous collaborations with The Void, including Star Wars: Secrets of the Empire and Ralph Breaks VR. Avengers: Damage Control will pair virtual reality with real-world sets and physical effects like heat and wind to create a uniquely immersive experience where guests can touch and feel.

Avengers: Damage Control will be available at the following locations:

Avengers: Damage Control opens October 18th for a limited run. To purchase tickets to the experience, be sure to refer to the official website here.

Will you be heading over the The Void to experience Avengers: Damage Control to fight side by side with your favorite heroes? Let us know in the comments!