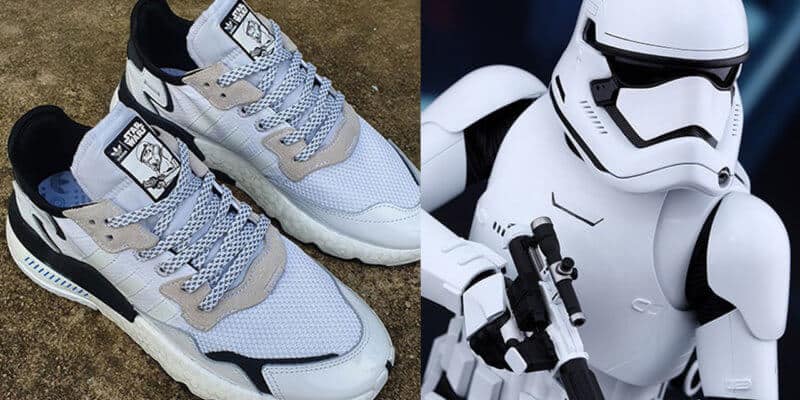 Star Wars fans–are you ready for another upcoming pair of shoes from a galaxy far, far away that is truly out of this universe? Then take a look below at the newly revealed sneaker collaboration from Star Wars x Adidas leaked online via social media, which we’re losing our spires over!

The Adidas Nite Jogger “Star Wars Edition” sneakers are themed after Stormtroopers–one of the Star Wars franchise’ most iconic group of soldiers and come only days after the recent leak by @yankeekicks on Instagram of the Star Wars x Adidas “R2-D2” Nite Jogger.

Adidas perfectly captures the theming of the elite troops in these new sneakers with the help of only the finest details. Some of which include a white base with black contrasting accents, a co-branded tongue (similar to the “R2-D2”-themed shoes), grey suede and reflective elements, which further pulls from the villainous intergalactic soldiers.

The leather shoes also feature BOOST soles with white and blue stripes toward the back of the heel. Additionally, the shoes feature “Open the blast doors!” and “Set to stun” phrases printed on the back of the left and right heels.

No official launch dates or price points have been revealed for the intergalactic sneakers, based on the famed movies. However, it’s believed they’ll be released in time for “Star Wars: Rise of Skywalker” later this year with the R2-D2 and the X-wing inspired sneakers from the line.

The exclusive Star Wars x Adidas X-Wing-inspired Ultra Boost, which looks just like a Rebel Alliance starfighter, first leaked online a few weeks ago with new images shared on the internet. This has since been followed by the R2-D2-themed sneakers–which appear to be another color variation of the Stormtrooper-inspired sneakers.

What are your thoughts on this footwear collaboration between Star Wars x Adidas? Let us know in the comments!