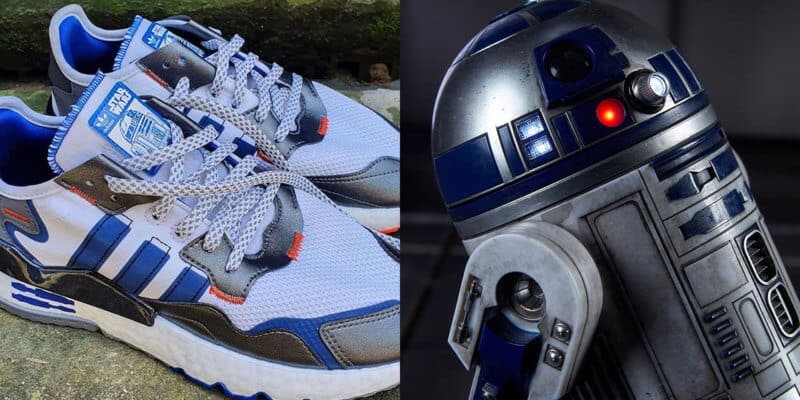 Star Wars fans–get ready for an upcoming pair of shoes from a galaxy far, far away that are truly out of this world! The newly revealed sneaker collaboration from Star Wars x Adidas leaked online via social media and we’re losing our spires over this extraterrestrial shoe wear.

The Star Wars x Adidas “R2-D2” Nite Jogger leaked online via the @yankeekicks Instagram account earlier this week. For those not familiar, Yankeekicks is an online marketplace for users to purchase and sell their kicks and it’s also a place to get a sneak peek at upcoming drops from major shoe retailers–including these new Star Wars shoes.

It goes without saying that the shoes are themed after one of the “Star Wars” series most beloved and iconic droids of all time: R2-D2. The shoes feature a white ultra boost soul with a gray and blue rubber bottom. This color scheme moves around the shoe in different decorative stitches and patterns.

Fitting with the droid, the sneakers also feature R2-D2 tongue labels and insoles, and a themed graphic found at the base of the heel.

According to Sneaker Freaker, the new shoes (pictured above) are believed to be released alongside the X-Wing and Millennium Falcon UltraBOOST shoes, which are being created in celebration of Lucasfilm’s upcoming film “Star Wars: The Rise of Skywalker.”

Only a few weeks ago did we get a first look at the Star Wars x Adidas X-Wing-inspired Ultra Boost, which looks just like a Rebel Alliance starfighter.

The new shoe design features an “S&L” trim with a graphic reminiscent to an X-Wing Starfighter imprinted on the heel counter and white sole. The shoes also include special insoles, co-branded tongues, and the symbol of the Jedi Order.

At this time, no official release date is known for either shoe collab. However, it has been rumored that both pairs of sneakers will launch in December with “Star Wars: The Rise of Skywalker.” Stay tuned as we will update this post the second we get a release date.

What are your thoughts on this collaboration between Star Wars x Adidas? Let us know in the comments!