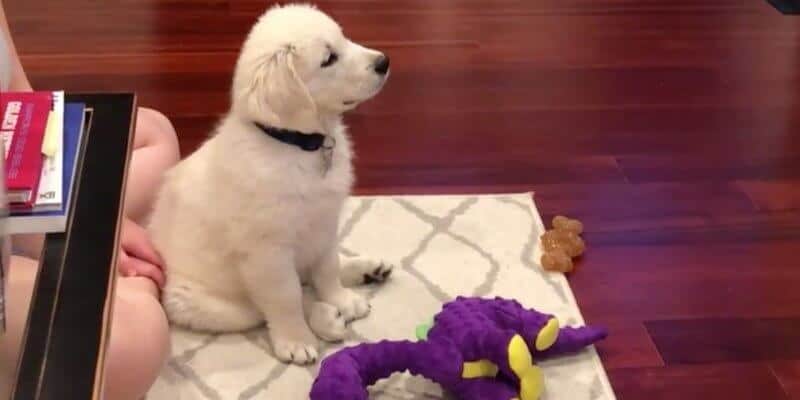 I think we may have found the biggest Disney fan out there! A Golden Retriever puppy, who goes by the name of Atlas, was caught on film watching one of Disney’s Animated Classics and it is absolutely adorable.

Atlas’ owner posted a video on the social site Imgur, and we can’t get enough. At the start, you can see Atlas making his way over to his human with a toy dangling from his mouth, like he is ready to start playing. But then, he suddenly stops dead in his tracks and drops the toy when he hears The Muses singing from Disney’s Animated Classic “Hercules”. He can’t take his eyes off of the screen and even makes himself comfortable as he sits down on the floor while The Muses open up the film, and honestly, we can relate.

But “Hercules” isn’t the only Disney Animated film that Atlas is obsessed with. The caption also reveals that he is a huge fan of Disney’s Animated film “Tangled”. (I hope to see a clip of this bundle of joy glued to the screen when Rapunzel and Flynn are singing on screen).

You can check out the video below:

I would love to see more clips of Atlas in the near future because this is just the cutest thing I have ever seen. Atlas, you are officially the world’s biggest Disney fan.

If you are looking to bring some Disney magic into the comfort of your own home, be sure to enter our Thomas Kinkade sweepstakes. You can win a gorgeous limited edition canvas of Mickey’s Victorian Christmas. Don’t miss out and make sure your name is entered to win. You can enter here.

Do you have a pet who loves Disney films as much as Atlas? We want to know! Let us know in the comments.