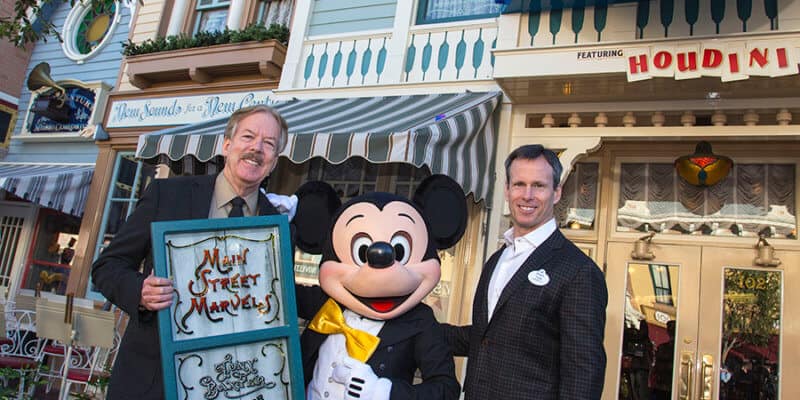 It’s safe to say that it would be hard to find any of us here and perhaps any of you reading whose life hasn’t been touched at some point by Tony Baxter. It’s hard to imagine any of us enjoying a day at the Disney Parks without seeing or enjoying something that he had a hand in creating.

In fact, the Disney Legend contributed to projects that include Big Thunder Mountain Railroad, Indiana Jones Adventure, Splash Mountain, the original Journey into Imagination Pavillion and perhaps most famously, for his input into the creation of Disneyland Paris.

Well, since officially retiring from Disney back in 2013, the same year he was inducted as a Disney Legend, Tony Baxter has still kept busy, consulting on current Imagineering projects, meeting Disney fans and it would seem, expanding on his own magical property in California.

Though Tony’s house looks like it’s been lifted directly from Disneyland, apparently he’s never been quite happy with the backyard, that is until a rewatch of Mary Poppins Returns last year at home.

He said this of the redesign:

I was watching Trip A Little Light Fantastic, this musical number in an abandoned park that comes to life, and I thought, This is the neatest thing I’ve ever seen. It created this very appealing and magical space.

We think you will agree, the final result certainly looks like it has been lifted directly from the sequel to the beloved classic.

Those that know the backstory to Tony Baxter will know his love of Mary Poppins dates back to before he was hired at Disneyland where he designed a Mary Poppins attraction for Disneyland that he hoped would interest the people at Walt Disney Imagineering. Eventually, he started his career at the parks scooping ice cream before becoming a ride operator and then getting hired as a designer.

His newly renovated backyard includes 10 iron Victorian-style lamp posts installed around a new fountain that fit in nicely with the trees and bushes that were already in place. British style paving slabs were all added as well alongside new iron benches. All of the lighting can be controlled with the simple touch of a mobile phone.

Of course, as talented as Tony Baxter is, he wasn’t alone in turning this dream into a reality. Julie Laughton, a designer from Julie Laughton Design Build in Laguna Beach was there for the ride and had this to say on working on the project:

Bringing the magic of Disney to Tony Baxter’s backyard for his Mary Poppins Theme was a dream come true for me.

Julie was also kind enough to provide us with the incredible photos in this piece!

It’s very un-backyardish. It’s more like a Disneyland thing, but I can’t help it.

Of course, there’s a lot more Mary Poppins coming to the parks soon with the recently announced attraction coming to Epcot. Wonder if they will look at any of Baxter’s original designs as part of the consideration phase?

Are you a fan of this Mary Poppins inspired backyard? Let us know in the comments below!