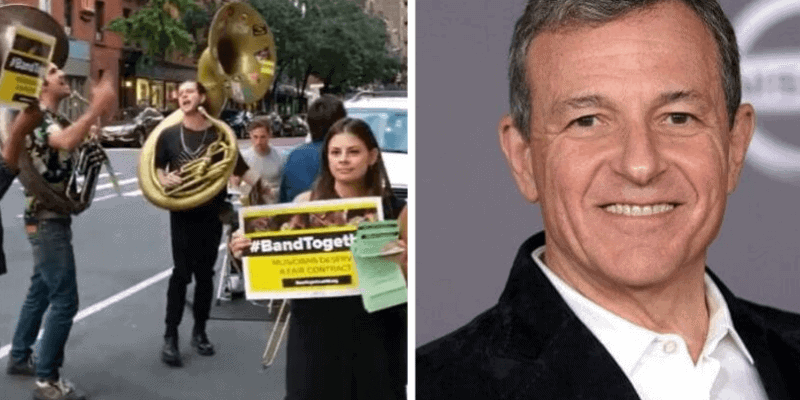 Members of a musicians union rallied this week against Disney Chairman and CEO Bob Iger in order to demand fair pay from The Walt Disney Company.

“We enhance your visuals; pay us fair residuals,” chanted 25 members of the American Federation of Musicians during their rally (which included a brass band) outside the 92nd Street Y on Tuesday in New York City. At the time, Iger was speaking with Oprah Winfrey about his new book, an autobiography that shares his “decency-over-dollars” approach to business. The union members were “out in the street calling on Iger to put ‘decency-over-dollars’ into practice and pay musicians fairly.”

Unlike actors, writers, and directors, musicians don’t get residuals from films and television shows made for streaming services, such as those being created for Disney+. And without these residuals, many musicians claim that they are unable to maintain a decent living. To put it in perspective, the union claims that without streaming residuals, a musician can take a 75% pay cut when a Disney film is released on Disney+, versus in theaters or on T.V.

“Every other group of artists that work on Disney streaming projects receives fair residuals,” said trombonist and composer Ray Mason, according to Deadline. “These residuals are vital to the livelihoods of freelance musicians. They allow us to maintain a basic income and do the creative work necessary of artists.”

Another protester added that she could make more playing for weddings than working for Disney.

“I can’t believe that Disney is making billions of dollars, but won’t even pay me fairly,” said violinist Adriana Molello. “Playing for weddings actually pays better than working on a multimillion-dollar Disney project. How can Bob Iger claim to value decency over dollars when the musicians who score his films and television shows are struggling to pay rent?”

Watch the video clips from the rally shared by the American Federation of Musicians below:

These comments regarding the wellbeing of Disney musicians come only a few months after The Walt Disney Company heiress Abigail Disney called out Iger for unfair pay practices and what she believes to be unfair working conditions at the Disney Parks. The company soon after defended its pay structure and called Abigail Disney’s claims “baseless.”

At the time of this report it’s unclear if anything will come of the American Federation of Musicians protest against Iger this week.