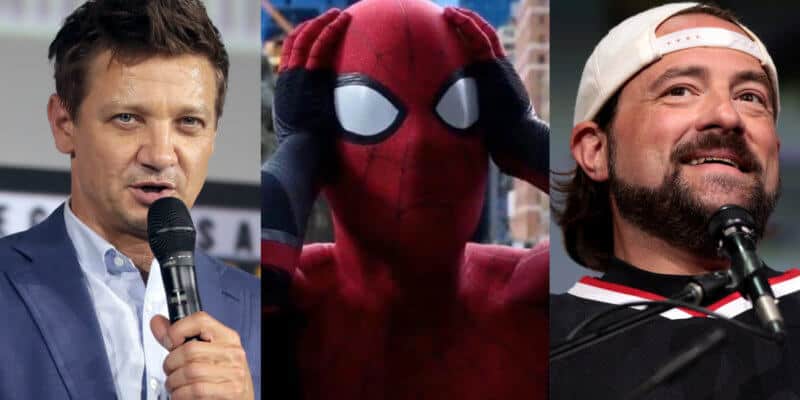 After Sony revealed their split with Kevin Feige and Disney on future “Spider-Man” universe films, actor Jeremy Renner and filmmaker Kevin Smith took to social media to plead with the companies to work through their financial differences and bring “Spider-Man” back to Disney.

News first broke of Sony ending its long-standing deal with Disney on the “Spider-Man” films yesterday when it was revealed that the companies couldn’t come to an agreement on the co-financing of the series’ future movies. This brought a lot of sadness to not only fans but also these famous names in the industry. And both of them decided to share their dissatisfaction over Sony’s decision on their personal social media accounts.

In Renner’s post, he shared an image of himself in “Avengers: Endgame” with the caption “Hey @sonypictures we want Spider-Man back to @therealstanlee and @marvel please, thank you #congrats #spidermanrocks #please.”

Hey @sonypictures we want Spider-Man back to @therealstanlee and @marvel please, thank you #congrats #spidermanrocks #? #please

Whether or not this plea is enough for Sony, it did pull in over 1.3 million likes and supportive comments asking for the same. One commenter wrote, “YES!!! Thank you for speaking up Renner!! #savespidermanfromsony”.

Kevin Smith responded to an article by IGN breaking the news–to which he wrote, “NOOOOOOOOOOOOOOOOOO!!!!!!!! Just stop it! Please, @SonyPictures – give @Disney what they want and many millions of us will keep giving you our money!…”

NOOOOOOOOOOOOOOOOOO!!!!!!!! Just stop it! Please, @SonyPictures – give @Disney what they want and many millions of us will keep giving you our money! Hey, @marcbernardin! Guess what we’ll be talking about tonight at @SVCantina (after we dish @MastersOfficial)? #FatManBeyond https://t.co/ALoOkpVrm1

The tweet got 3.3-thousand re-tweets and over 16-thousands likes. Many followers also replied to Smith’s Tweet, expressing their grief over the situation.

Of course, neither Jeremy Renner or Kevin Smith have any ties to the Sony-owned “Spider-Man” franchise. However, their cries don’t fall on deaf ears as many fans also have harsh feelings over Sony cutting its ties with Disney for the Marvel character film series. Shortly after the news broke yesterday, fans took to Twitter to share their sadness and anger toward the news–even making #BoycottSony trend on the social media platform.

Ryan Reynolds also commented on the subject. In a response to a fan’s question on Twitter that said, “Can we get a Spider-Man and Deadpool movie now,” tagging Reynolds and Holland in the Tweet, Reynolds replied, “You can. But you can only see it in my heart.”

You can. But you can only see it in my heart.

Late last night, Sony released a statement on the subject revealing their “disappointment” over the fallout. In it, they claimed the cause of the split to be Kevin Feige’s recent additions of projects, which they say would keep the Marvel Studios President too busy. However, other sources claim it mostly came down to the money.

What are your thoughts on Sony pulling out of their deal with Disney to co-produce the “Spider-Man” films? Let us know in the comments below!