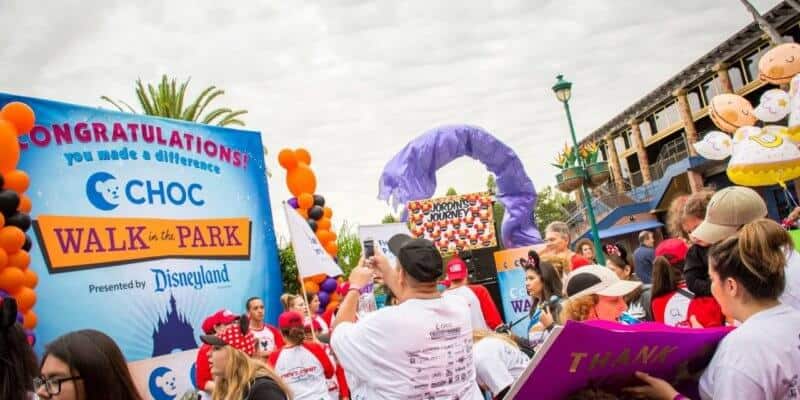 For 29 years, the CHOC Walk has provided Southern California residents and visitors alike an opportunity to raise funds to support services at the Children’s Hospital of Orange County, and this year’s event on August 11 was its most successful yet!

The inaugural CHOC Walk took place in 1990 to raise funds for the hospital’s new building (replacing the original 1964 structure that was built thanks in part to local civic leaders, including Walt Disney). About 1,000 people participated in this first CHOC Walk, an event that in 29 years has grown to about 14,000 participants as of this year.

In 2002, the event was re-branded as CHOC Walk in the Park and was presented by the Disneyland Resort, which has continued to host the event to this day. CHOC Walk in the park now features a scenic 5K route around the Disneyland Resort, allowing walkers to meet Disney characters along the way as they pass through Disneyland, Disney California Adventure, and Downtown Disney, all before the resort opens to the public.

The total amount of donations collected has steadily increased since the event’s move to the Disneyland Resort, in part due to Disney’s effort to include characters and entertainment along the route to make the event a memorable and empowering experience for participants. Disneyland has also become one of the biggest supporters towards services and patients at the hospital in recent years. Last year, the resort even initiated a partnership to provide magical experiences for its patients.

Over the years, CHOC Walk has raised more than $35 million, with funds supporting the hospital’s mental health services and neonatal intensive care units. This year’s event alone has already raised about $2 million. Programs like CHOC Walk ensure that families whose children are patients at the hospital will always be taken care of and that no children are ever turned away due to inability to pay. CHOC Walk has also earned national notoriety for being the largest pediatric fundraising event in the country, and the hospital itself is known as one of the country’s best children’s hospitals by U.S. News & World Report (reported in 2017 and 2018).

Of this year’s 14,000 participants were walkers made up of Southern California residents and Guests from around the world. Of the 450 teams in this year’s event, members were present representing Canada, Australia, Mexico, and Japan.

With the 30th anniversary of CHOC Walk approaching next year, event organizers are already hard at work planning a celebration for the occasion that is sure to inspire more giving and instill an even greater sense of community around the Children’s Hospital of Orange County.

CHOC Walk takes place at the Disneyland Resort each August, and more information about the event is available at chocwalk.org.

Have you ever participated in CHOC Walk in the Park at Disneyland? Share your memories with us in the comments!