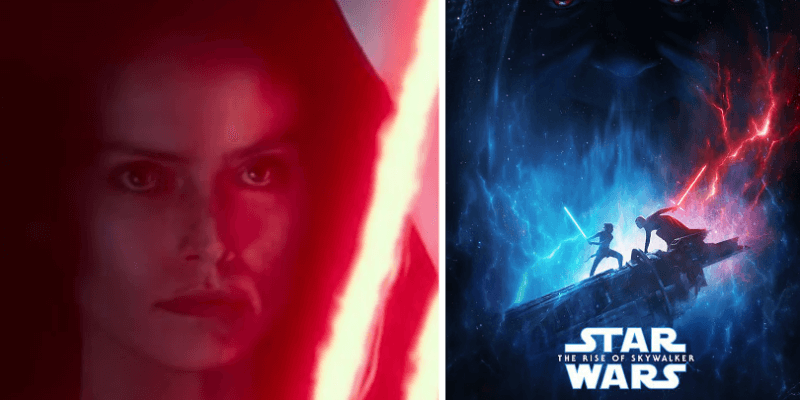 Warning: This article shares the spoiler that we think Disney just dropped after the release of the all-new trailer for “The Rise of Skywalker.” If you’re a big fan of the “Star Wars” universe, read with caution.

We’ve been pumped to see “Star Wars: The Rise of Skywalker” for years now, and the sneak-peek of the new film shown at D23 Expo last weekend only made us even more excited for the December movie. Disney seems pretty excited too…maybe a little too excited, since the team accidentally dropped a major spoiler about Rey.

Fans around the world were completely blown away by the sight of “Dark Rey” at the end of the newest trailer for “Star Wars: The Rise of Skywalker.” At the end of the clip, we see Rey holding a two-bladed red lightsaber, wearing what appear to be Sith robes, and looking totally mystified. Some fans of the franchise were excited to see Rey possibly turn evil, while others were definitely upset at the idea of the trilogy’s hero becoming a villain.

But don’t worry, “Star Wars” fanatics. It turns out, that wasn’t actually Rey.

Well okay, it was Rey, only it was just a vision. At least, that’s what Disney originally wrote in the post on the official “Star Wars” website that was shared after the trailer dropped at D23 Expo. StarWars.com referred to Dark Rey as a “vision,” which leads us to believe that it was a nightmare that one of the characters had. And as Esquire points out, many of these visions in the “Star Wars” franchise rarely end up coming true.

Unfortunately, this is pretty much a major spoiler. Many fans were totally convinced that Rey had turned to the Dark Side, while other suspected it was a vision. But after Reddit users discovered that Disney had used the word “vision” to describe Rey at the end of the trailer, our suspicions that it wasn’t reality at the end were confirmed, and now we most likely know going into the film that Rey in Sith robes isn’t real.

Disney has since corrected the website and revised the portion of the post that originally described Rey. Now, it says, “…but the new footage, including a moment where Rey appears to toss a fully ignited lightsaber, and of course the sight of Rey with a reticulated red blade, was nothing short of thrilling.”

As you can see, the website now says “the sight of Rey” instead of “the vision of Rey.” We’re not sure if Disney and Lucasfilm want us to believe that Dark Rey was a vision, or if they realize their mistake and caught that they spoiled the film for us. But we suspect that Rey will stay the hero by the end of the trilogy, just as we thought she would.

What do you think: did Disney  completely spoil “The Rise of Skywalker” for fans, or is the use of the word “vison” a minor slip-up? Let us know in the comments!