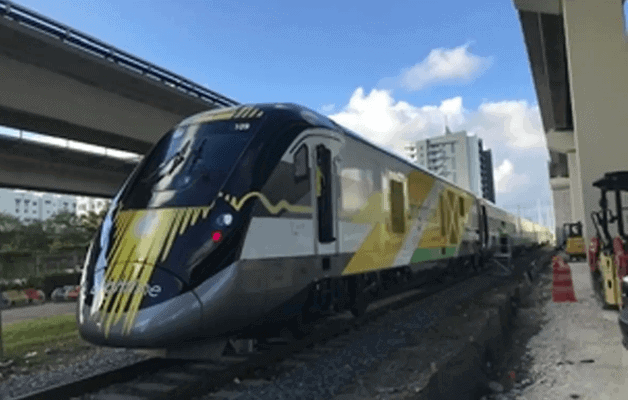 Virgin Trains (formerly known as Brightline), which is working on a train line from South to Central Florida, is hoping to open a Walt Disney World station at the same time their Orlando Airport (MCO) station opens.

“It’s our expectation to get it done and to build out to Disney,” Virgin Trains’ president Patrick Goddard told the Orlando Sentinel. “It is entirely conceivable that that can happen with the delivery of the Orlando station.” While the Walt Disney World station is not a done deal, since the company is still in negotiations with landowners in the area to secure a station site, Virgin Trains did sign a letter of intent with Disney last year. “We’ve had an excellent relationship with Walt Disney World,” Goddard said. “They are big supporters of our project.”

Last year, Virgin Group, which is owned by Sir Richard Branson, partnered with the owner of the train system formerly known as Brightline. The company is now known as Virgin Trains, with rebranding taking place this year. This week, Miami’s train station was renamed Virgin MiamiCentral.

The company already operates trains between Miami and West Palm Beach, with plans to connect to Orlando and possibly Tampa. According to the Orlando Sentinel, “Virgin officials said their top priority is getting 30 to 36 months of construction started imminently.” The hope is to open the Walt Disney World station at the same time as the Orlando Airport station, but the timeline is dependent on permits and funding. The nearly 20-mile extension to Walt Disney World would also include a stop at SunRail’s Meadow Woods station, connecting the commuter-rail system to Orlando Airport.

While the idea of connecting MCO and Walt Disney World by train is intriguing, we’re wondering how much Disney guests flying into Orlando would actually use the system. Right now, many guests traveling between Walt Disney World Resort hotels and MCO take advantage of the free Disney Magical Expres bus. But, guests staying off Disney property who can’t use Disney Magical Express might find the train system more appealing than a car service or rental, depending on the cost.

Those traveling from South Florida could find it much easier to get to Walt Disney World thanks to Virgin Trains. Rather than driving, guests could take the train all the way to the Walt Disney World station. As Goddard told the Orlando Sentinel, a Disney station “would integrate with their transportation system, hotels and theme parks.”

Would you take advantage of a Walt Disney World train station? Let us know in the comments below!