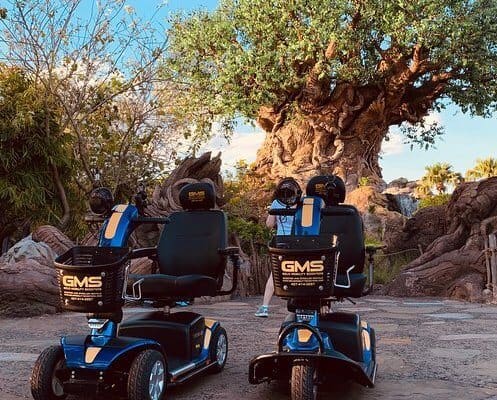 For some, scooters are a necessary means for maneuvering around the Walt Disney World Parks. However, as Disney theme park attendance continues to be on the rise, new reports show that more lawsuits and accidents related to Scooters and ECVs have followed.

$50 a day is the going rate for on-property scooter rental and for some guests, the increase of mobility the machines grant these visitors makes it more than worth it. However, according to a new report by the Orlando Sentinel, it was found that 11 lawsuits filed last year were all due to allegations revolving around injuries caused by scooters on Disney property. And according to an Orlando Sentinel analysis of Orange Circuit litigation, this is the highest number of scooter related incidents in the past five years. As we move into 2019, we’re already sitting at four lawsuits in connection with the use of scooters on Disney property.

One lawsuit currently waiting for trial in 2020 comes from Zachary Corn, a Walt Disney World visitors from Tennessee who says he was clipped by a scooter from behind while at Epcot’s Food and Wine Festival in 2017.

“He never saw the guy coming,” said his attorney, David Heil, who has noticed more calls coming into his law firm dealing with scooters since around mid-2017 and into 2018.

Most Disney fans who visit the parks often can probably speak to the fact of having to dodge a scooter or EVC at one point or another. However, in some cases, it’s the scooter drivers who fall victim.

Eugene Teto, 62, said he felt like he was driving his scooter blind as he went backwards down the ramp to get off the Monorail. Still, he was following proper Disney protocol as theme park workers directed him, the Connecticut man said in court documents.

According to the lawsuit Eugene filed in 2018, it says ““Eugene felt his (scooter) begin to tip backwards, then–suddenly–it flipped violently backwards, slamming Eugene’s head onto the concrete platform and twisting his neck in a way that nature never intended.”

Another victim, Susan Purell, who suffers from asthma, sat on her scooter she’d brought from home while on a Disney Bus. But when the bus driver quickly hit the gas at a yellow light in hopes of making a sharp turn, it resulted in her scooter tipping over, slamming her on the bus floor, according to her lawsuit.

“As soon as the driver brought the bus to a stop, passengers jumped up to try to assist Mrs. Purcell,” according to the lawsuit filed in March. “But Mrs. Purcell was stuck in the seat of her [scooter], and no one could free her or lift the [scooter] upright. Mrs. Purcell lay on the floor of the bus, helpless and stuck, until fire rescue finally arrived.”

Seeing these lawsuits, one might ask if a quick fix could be done. Possibly a regulation on their usage by park guests? This is possible. Although, it would require the U.S. Department of Justice’s approval.

As unfortunate as these situations have been for some, the scooters have been a “godsend” for others.

Craig Belke, 64, who worked physical jobs for decades on a volunteer fire department and with machinery at a school district in New Jersey used to be “in terrible agony” from his back pain, which generally came by the third day of his family Disney vacation.

According to Orlando Sentinel, Belke hated the idea of using a wheel chair, which forced his wife to push him around, making him feel helpless. Although, Belke finally gave in and rented a scooter three years ago and now he won’t go to a theme park without one.

“It turned out to be one of the best trips I’ve ever had. I wasn’t in pain anymore,” Belke said.

Even with Belke’s happy ending, it still rings true that as Disney’s attendance keeps rising, so does these scooter related lawsuits telling of unfortunate tales, which for most, ruined their entire vacations.

According to Orlando Sentinel, Disney plans to widen paths at the front of Epcot and charge more for busier days in the hopes of easing congestion. But even with these attempts at a possible solution to the problem, in some circumstances, these incidents will more than likely occur again.