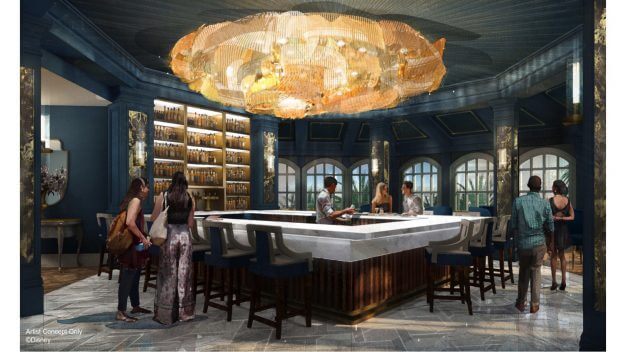 This fall, Disney’s Grand Floridian Resort & Spa is saying “be our guest” with a new “Beauty and the Beast”-inspired bar and lounge.

Inspired by the live-action movie from 2017, this new bar takes over the former Mizner’s Lounge and Commander Porter’s store at Disney’s Grand Floridian Resort & Spa. The re-imagined lounge will include four unique spaces inspired by Belle and the Beast. Here’s how Disney describes it:

The signature bar will glow from the light of a magnificent gold chandelier that takes its inspiration from Belle’s flowing ball gown, with subtle nods to the Beast’s magical rose. The formal library showcases classical baroque designs and French furnishings inspired by Belle, with hints of the Beast’s friends. The garden room will be a whimsical space that draws its inspiration from the enchanted forest surrounding Beast’s castle. And an outdoor patio will evoke the romance of Beast’s garden terrace.

Walt Disney World is also home to the ever-popular Be Our Guest Restaurant at Magic Kingdom. Themed like the Beast’s castle from the 1991 animated movie, the restaurant offers table-service dining for dinner and quick-service for breakfast and lunch. When it opened, it was the only publicly accessible place in Magic Kingdom that served beer and wine.

This new bar and lounge at Disney’s Grand Floridian Resort isn’t the only “Beauty and the Beast”-themed addition coming to Walt Disney World. Last year, Disney announced a “Beauty and the Beast” sing-along created by Don Hahn, producer of the animated and live-action films, is on the way to Epcot.

While we’re big fans of the tale as old as time, we’re a little surprised Disney chose “Beauty and the Beast” for the Mizner’s Lounge re-theming. With the Grand Floridian’s Victorian style, it seems like “Peter Pan” (which is set circa 1900) would be a more natural choice. And even though “Mary Poppins,” which takes place in 1910, is a few years late for the Victorian era, that movie also seems like a good fit for the hotel’s aesthetic. Regardless, we’ll still be excited to check out the “Beauty and the Beast”-inspired lounge when it opens this fall.

What do you think about the new “Beauty and the Beast”-inspired bar and lounge coming to Walt Disney World?