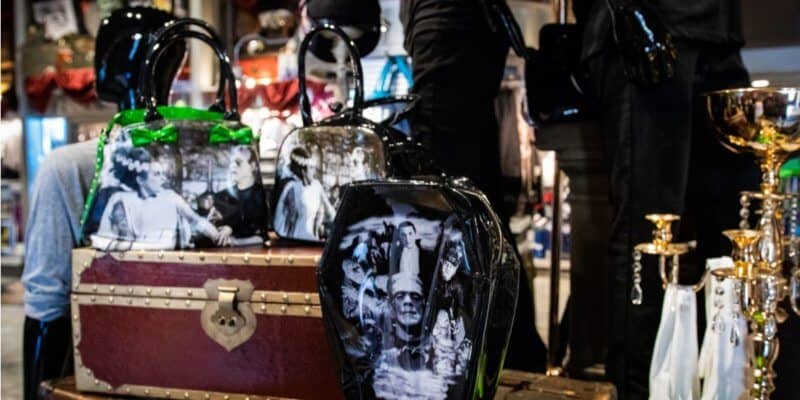 As the story goes, this monster merchandise mecca materialized in the repurposed prop store that was once Pantages East Theater, an expansion to the prominent Pantages Theater (home to the Horror Make-Up Show). This recently revealed gift shop took up residence at Universal Studios Florida this month. 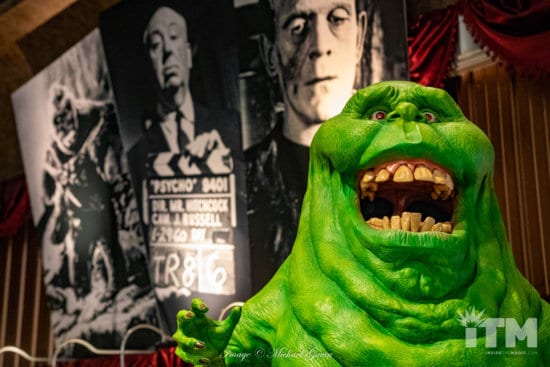 Located behind the Kress Department Store façade on Hollywood Boulevard, directly across from Annual Pass lounge, Pantages East emerged as the go-to place to purchase a piece of monster memorabilia at Universal Studios Orlando Resort. What was once a pop-culture themed exit gift shop for both the Horror Make-up Show and Terminator 2-3D, is now dedicated to Universal’s legacy of monster movies and related items. 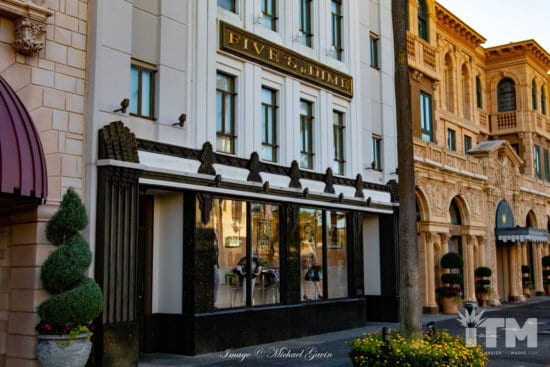 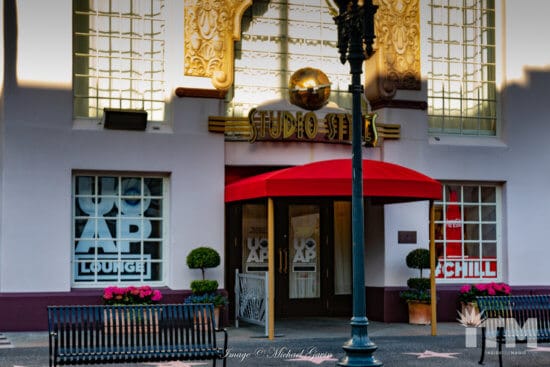 While it’s clear that much of props and macabre merchandise migrated from other park locations (Williams of Hollywood and the Film Vault, for example), there’s more than monster merchandise to this new Studios’ store. Pantages East has monster movie powered past to explore as well. 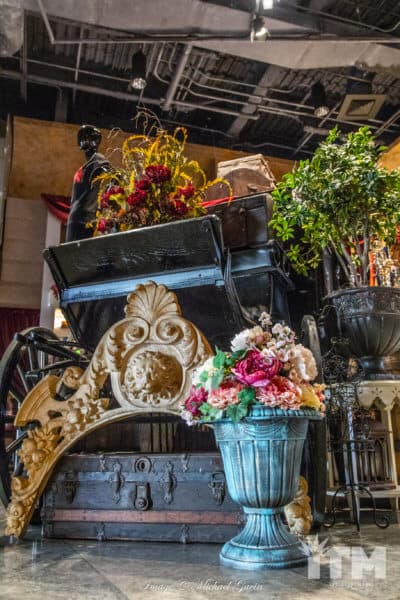 Most Universal Studios Florida frequent visitors are familiar with Pantages theater. Located across from Mel’s Diner in the park, this art deco style structure is currently home to the Horror Makeup Show. According to lore, Pantages was once a grand performance theater.

Many may have forgotten, or not even known at all, that Pantages once enjoyed a sister showplace. Known as Pantages East, this silver screen sensation featured horror and sci-fi films from Hollywood’s golden age. Perhaps the reason many may not recall this magnificent movie house could be because it closed in 1938. The space was subsequently used as prop storage for the adjacent Pantages stage theater. 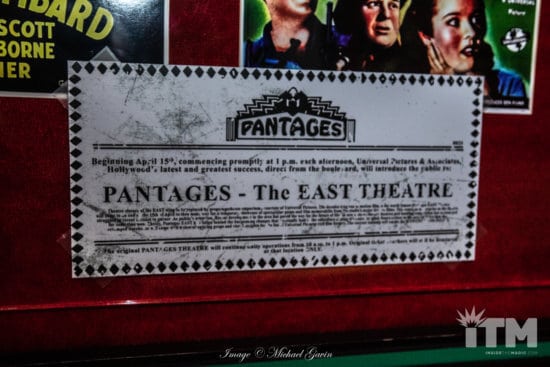 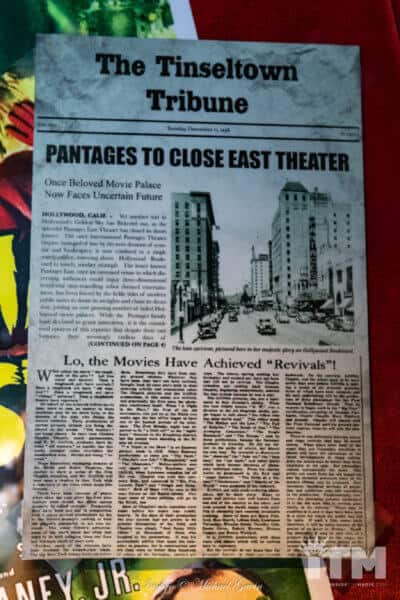 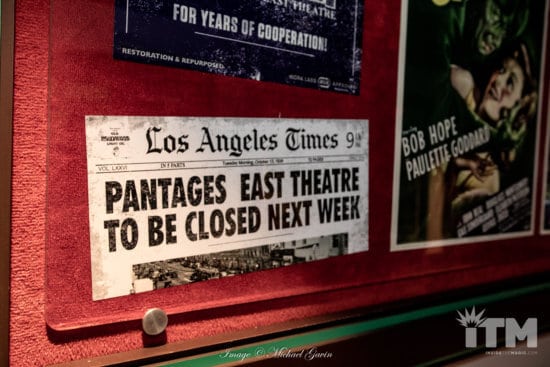 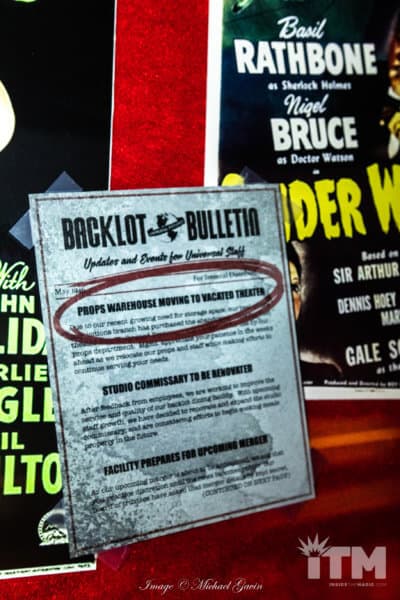 Several years later new tenants took over, opening the doors of this once warehouse of theater props to the public and stocking it with macabre merchandise in honor of the venue’s original horror/sci-fi movie screenings. Amazingly, the old cinema turned warehouse had not changed much since its service to the theater. Many of the original props and several signs can still be seen at the old movie house, especially along the adjacent hall between Pantages and Pantages East (exit hall to Horror Make up show). 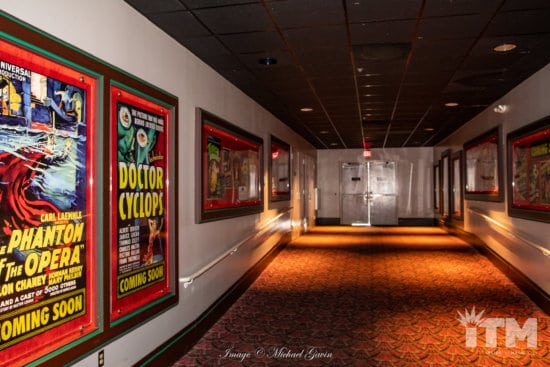 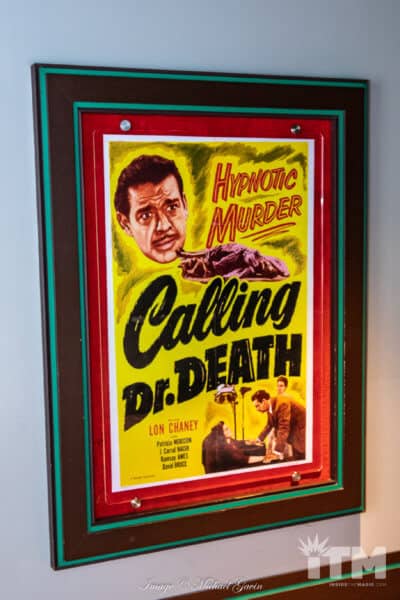 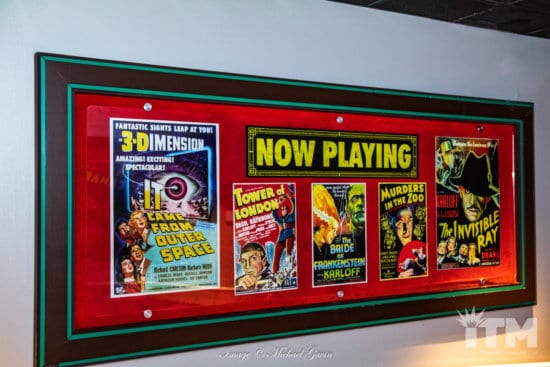 Studios’ shoppers stopping by this supernatural store are greeted with a host of darkly delicious props and posters from various horror franchises. Displayed upon, around and below these décor delights are tee shirts, hats, mugs, tumblers, towels and all sorts of horror-themed souvenirs. Pantages East could easily be its own attraction with all of the amazing accent detail lovingly displayed within. 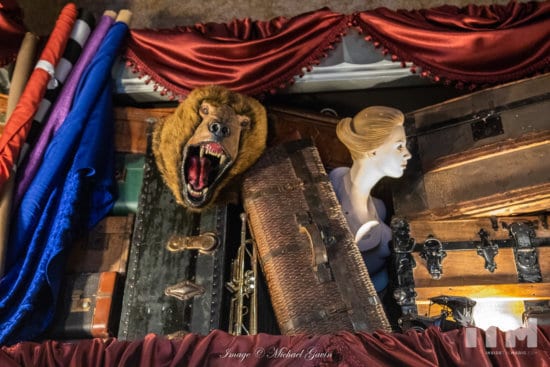 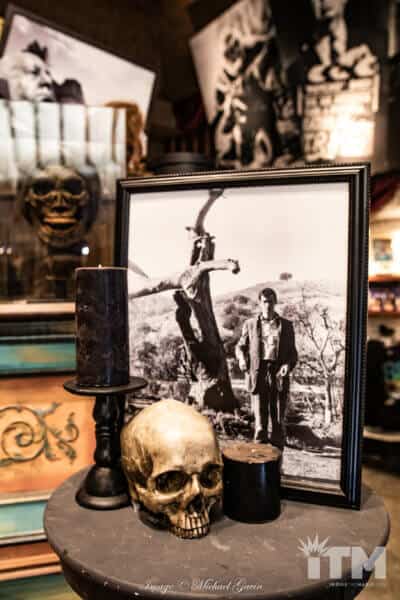 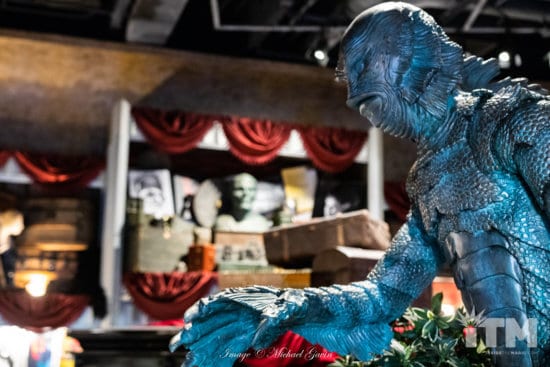 Devil’s in the Details

As a mega monster merchandise shop should, Pantages East hosts a horde of horror history within its walls. Visitors vistas include a full-size horse-drawn hearse (used previously for HHN), transport pods (“The Fly”), Slimer (“Ghostbusters”), Mother (“Psycho”), and a life-sized Creature from the Black Lagoon. Joining these larger than life props are scores of photos, posters, and accents (funeral flowers, candelabras, mirrors, trunks and other assorted props). Combined with moody lighting and mountains of monster related merchandise, the eerie atmosphere is a fear fan’s dream come true! 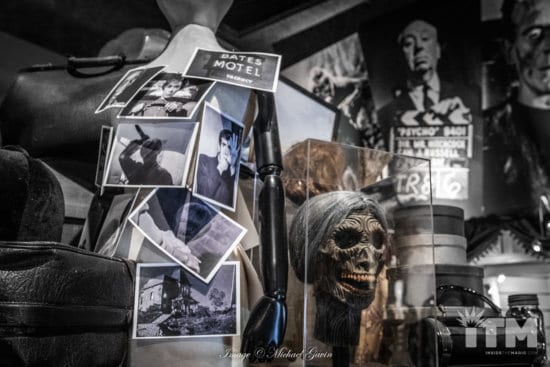 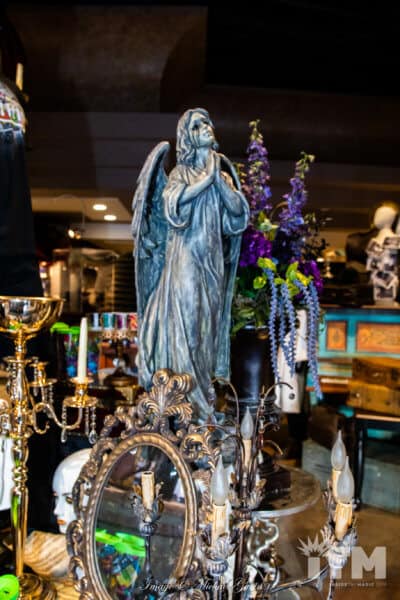 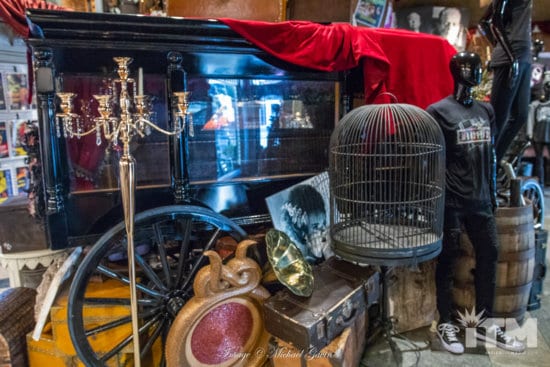 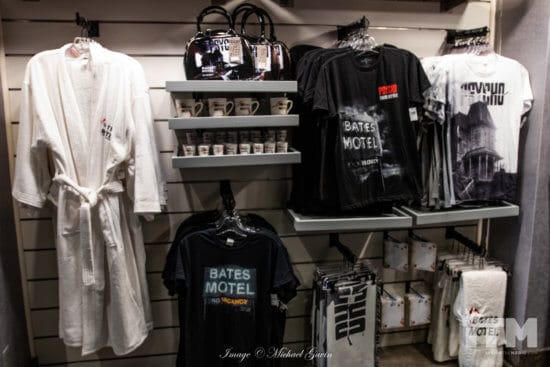 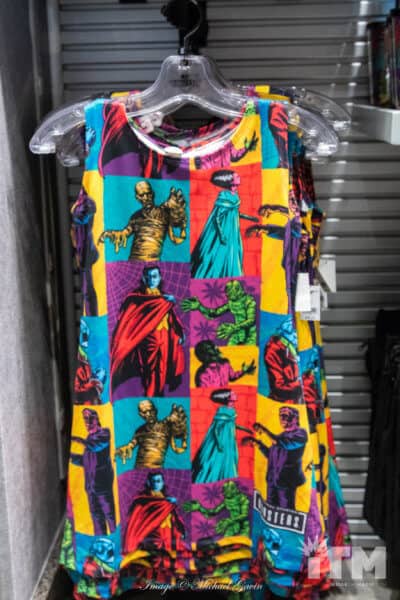 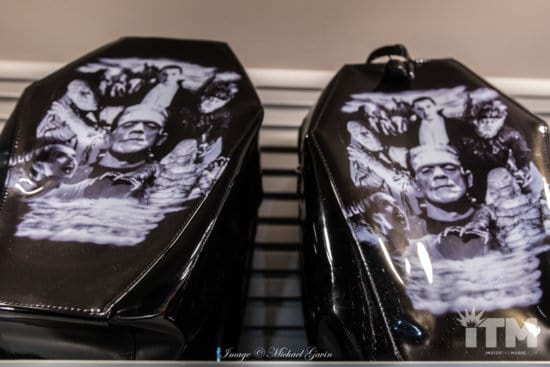 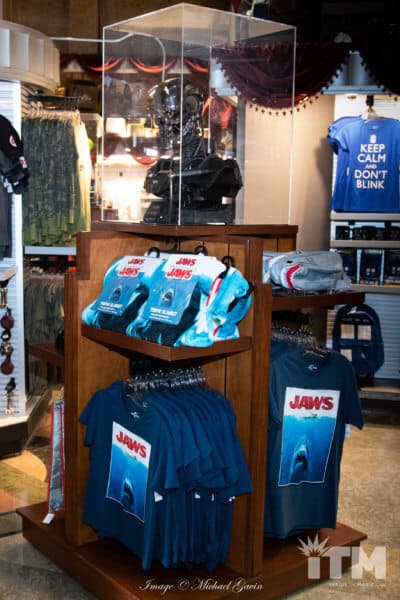 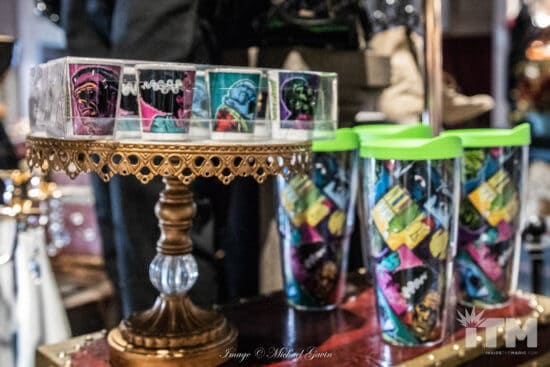 Collectors will enjoy various autographed photos, figures as well as high-end collectible figures and prop replicas. There’s even a giant painting of Vigo the Carpathian (“Ghostbusters 2”) which seems to be alive as his eyes appear to follow those who gaze too long upon them ($950). 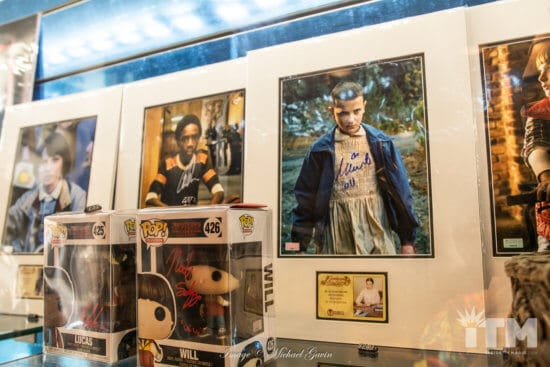 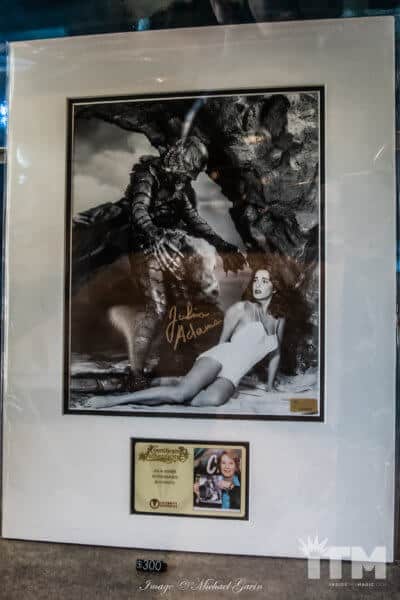 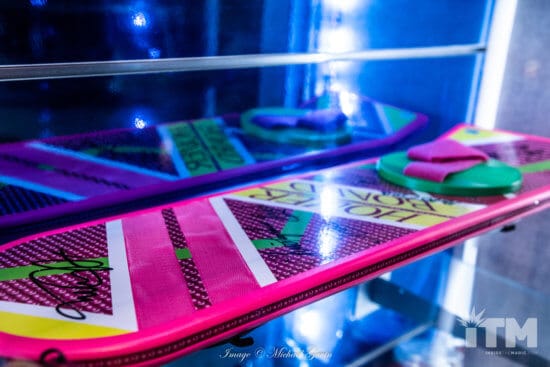 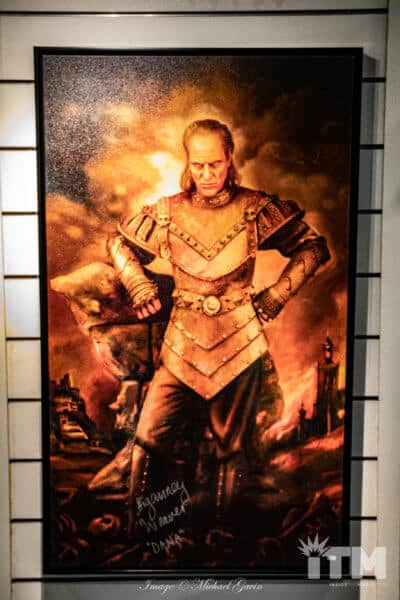 Pantages East is a magnificent manifestation of monster memorabilia and merchandise. A wonderful tribute to Universal’s legacy of creating the horror film genre with its Classic Monster movies. It should not be confused with Williams of Hollywood (across the street) which still sells period props, and various items once used around Universal Studios Orlando. 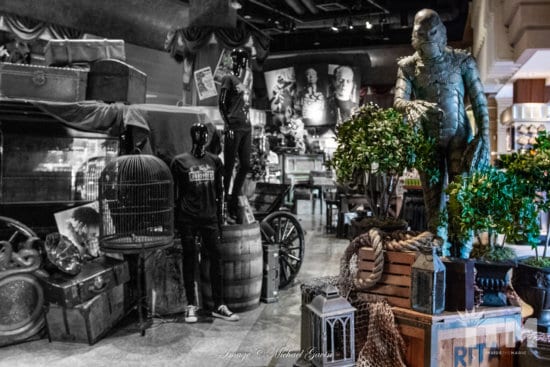 Clearly, this re-imagined souvenir shop is the result of passion and dedication to the Studios’ monster legacy. As such, another delightfully dark design crafted by the same responsible for the Halloween Horror Nights Tribute store.

To the powers that be at Universal Studios Florida, on behalf of all the fans of fantastic fear films: PLEASE continue this trek towards including Classic Monsters and horror themed fun at the company’s theme parks! 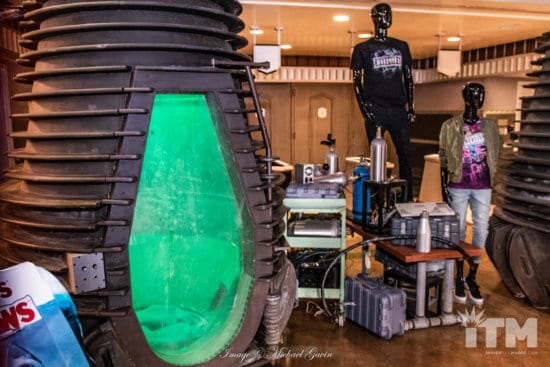 Are you a fan of Universal Studios Classic Monsters? Which monster-merchandise masterpiece is a must-have for you? Share your screams in the comments below. 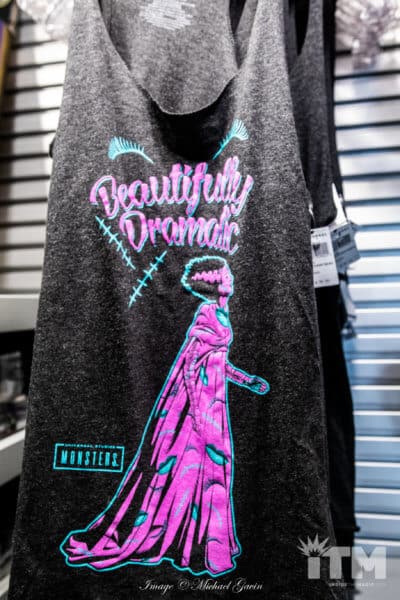