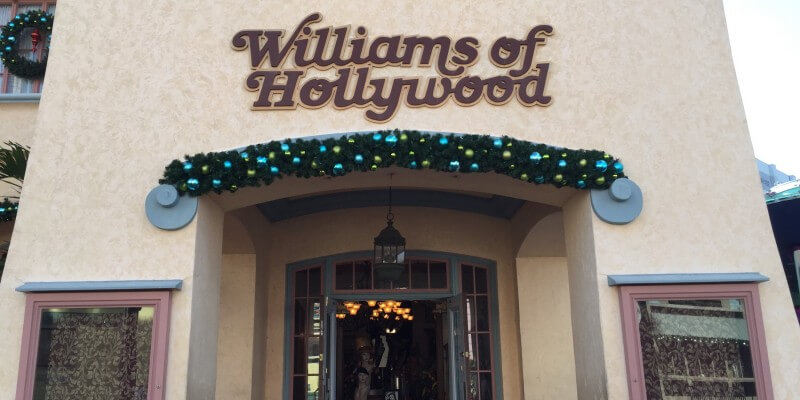 With a wave of a wand, and the words “sim sala bim,” you’re now able to feast your eyes on a magical new shop that appeared out of nowhere. Williams of Hollywood Prop Shop opened days ago under a shroud of secrecy, just like the magic tricks that formerly took place inside. No word was given or any announcement made of what was coming to the corner unit between The Dark Room (now the Betty Boop store) and Mel’s Drive-In; the store just appeared. Inside the old magic shop you’ll find an interior breathing with life, stocked from floor to ceiling with nostalgic props from old attractions and special seasonal events from Universal’s past.

The store is a first of its kind for Universal, as well as in the collective theme park world. Offering up attraction props, themed decor and costumes from current and past shows has long been a collectors dream and they’re making that dream come true.

By being operated directly through Universal itself, it gives the ability for someone to find a piece of storied nostalgia that can forever be linked to a memory. This type of souvenir is often the holy grail for some fans, and truly adds that “one-of-a-kind” addition to a dedicated collector. This isn’t the first store to pop up in a theme park selling memorabilia, but what makes Williams of Hollywood different is the diversity. It’s not offering signed photos or scripts, instead small screen used items from the film and TV universe as well as full size attraction props, signage, costumes and display pieces have been made available.

Want a fiberglass cow from the now closed Twister: Ride it Out attraction? Apparently lots of people did, since they sold two of the three available on the first day. At the time of this writing, one was still available. But don’t expect it to hang around for long. When you’re looking around in the shop, your eyes will roam from corner to corner because everywhere you look there’s something. And almost everything is for sale, with the exception of some display cases.

The stock inside the store isn’t meant to last forever, as most pieces fall into the “once it’s gone, it’s gone” category. However, some pieces are third party provided. The posters you see below; all mass produced and when purchased are provided in a shipping tube. Same goes for the dinosaur heads, which will set you back $1,800.00 a piece and shipped from the manufacturer. You can also find busts of your favorite classic Universal horror monsters and other creatures available for sale. Some you’ll recognize, while others are obscure unknowns created exclusively for window/merchandise displays around the property. Old film strips from Universal films and cameras along with antique pieces also take up residency here. If you plan on doing some shopping, take note: the prices here range from a few dollars up into the several thousand, and what you see today could and probably will be gone the next you visit. It’s the kind of vintage thrift shop where your impulse buy is the the best answer, basing that on foot traffic alone. Thousands of people flooding the park brings extra attention, and deep pockets. If you see something you want, snap it up and regret it later. Items move fast, and everything has a story.

If the possibilities were endless, what would your one item be that you’d love to take home from a theme park?