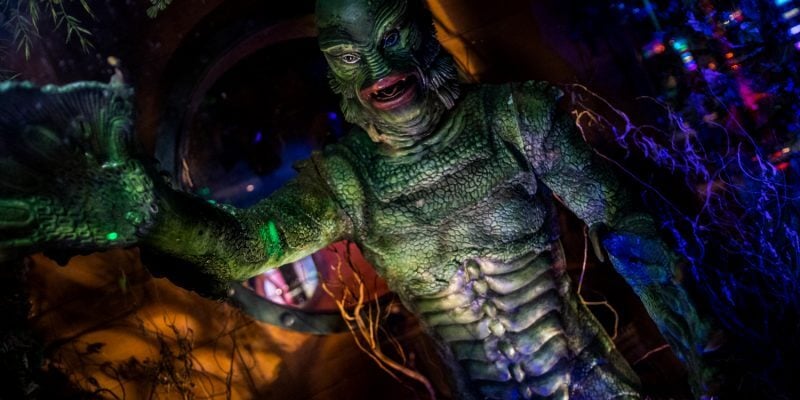 Monsters like Dracula, the Wolf Man, Frankenstein’s monster and the Creature from the Black Lagoon are the stuff that nightmares were made of.  These classic creatures, a staple in the Universal Studios film history, have inspired countless impressionable children to tune in to their creative core.  Scores of artists, film makers, and writers owe a debt to the exciting terror these icons of horror invoked.

When Universal Studios opened its theme park in Orlando Florida (1990), the focus was filmmaking and everything to do with that process.  The Phantom of the Opera Horror Make-Up Show (now known as Universal’s Horror Make-Up Show) credited creatures from their horror library.

“Catch your favorite celebrities as they converge on Monsters Café.  Offering frightfully good pizza, pasta like Mummy used to make and devilish desserts.” is how the new dining option was described on park maps.

Within this completely re-themed horror haven, various sections of the seating area were devoted to different monsters.  The Bride of Frankenstein, the Mummy, and Creature from the Black Lagoon, Dracula and even the Munsters were represented.  Interspersed with life-sized monster mannequins were production photos, props, and gags based the various classic horror films.  Several television sets (eventually replaced with flat panel monitors) showed movie trailers along with footage highlighting other scenes from other movies and advertisements for events and park features. Over the past two years, Universal Orlando has been transforming the café into a truly terror-ific experience. This overhaul breathes new life into the restaurant.  The result of this monster make over takes Universal Studios’ Classic Monster Café from a monster themed dining option to a vivid, immersive horror tribute.

Most of the non-monster related items have vanished. These have been replaced with new artwork, new scenes and more. Above the queue a giant electrical device, similar to that which brought life giving electricity to Frankenstein’s monster, erupts into action after a loud clap of thunder announces the impending lightning storm.  Lights flash, power buzzes telling its own story of creation (this dazzling light show repeats regularly every few minutes). Laboratory apparatus has been refreshed to once again illuminate the path towards science and condiments. This colorful collection of contraptions rests just above the condiment area, separating the ordering stations/cash wraps from the dining area. Entering the dining area is breathtaking.  Famous monsters are depicted on the walls.  The familiar feel to these masterpieces are easily recognized as the work of famed fear artist Basil Gogos.  These larger than life illustrations are the largest representations of Mr. Gogos’ work, recreated from high-resolution images provided by the Gogos family, a fitting tribute to this master craftsman who recently passed away. Busts of several monsters have been repainted to represent Gogos’ style and blend wonderfully with his artwork throughout the various themed seating areas. An almost complete overhaul of the science fiction section brings a much more appropriate tone to the area.  Once bright windows and doors now sport cosmic colors to bring the light level down.  A giant Metaluna Mutant silhouettes the wall adjacent to a display of various ray guns amid busts and statues of aliens and spacemen.  Above that armory a small flying saucer hovers.  Just past this, a wall of cryogenically frozen aliens pleads to be thawed.  All of this will soon be joined by a pair of giant spiders, a nod to the original signage when this area was also an entrance to the café. Additional enhancements include a trio of Jacob’s ladders, large printed letters which spell out “RITA,” the name of the boat seen in “Creature from the Black Lagoon,” and full restoration of the life sized monsters that seem to stand guard over the café. All of these delightful details are truly brought to life with light.  The entire location was relit, receiving a full overhaul of new illumination.