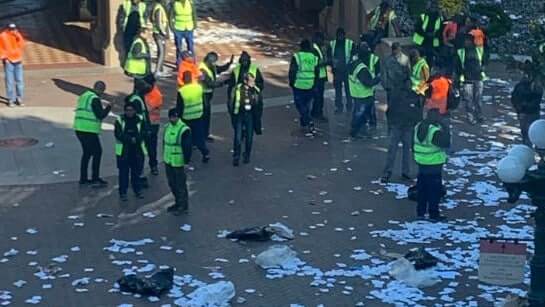 Guests visiting Disneyland Paris were left in shock after seeing the park’s Main Street middle entrance in a papery mess after protestors left behind litter and handwritten signs.

Over the weekend, News.com.au reports that workers from Onet, an independent cleaning and logistics company employed by Disneyland Paris, protested the park against unfair pay and harsh working conditions. As part of their demonstration, the employees left behind enough trash to cover the park’s main entrance and across Disneyland Hotel. Due to the protest, Disneyland’s Main Street entrance area was eventually closed off to park guests.

To see this happen as a protest at @DisneyParis_EN makes me so sad and disappointed. Litterpicking in the park is one of my sons favourite things to do and to see this is heartbreaking. How long will this happen and how far will it blow it the wind? Who clears this up DLP? ???? pic.twitter.com/00l5aitexI

One was definitely able to get their point across from their demonstration. However, many Disneyland Paris Resort visitors were less than pleased with the aftermath.

In a tweet by park guest David Woods, he writes how he “paid massive money” to stay at the Disneyland Hotel, only to “walk around in the trash and be intimidated” by his children.

Another replied: “Agree. Disrupting children’s holidays, which their parents have paid a load of money for is unnecessary. Do it outside the park if you have to.”

@DisneyParis_EN @Disney paid massive money for Disney land hotel to walk around in trash and be intimidated with my children. Not good enough. #YellowVests #DisneylandParis pic.twitter.com/lhDpyA6wHG

In response to Woods’ tweet, Disneyland Paris tweeted: “Dear David, we are doing everything possible to limit the disruption caused by employees of a contracted cleaning company, and we apologies for any impact that it may have. The attractions and entertainment experiences are operating as scheduled.”

News.com.au reports that guests were still able to gain access to Disneyland over the weekend via the park’s right entrance.

Last month, Disneyland Paris made headlines when an escalator malfunctioned at the Marne-la-Valee station, which is next to the front gates of Disney Village and the theme parks at Disneyland Paris.