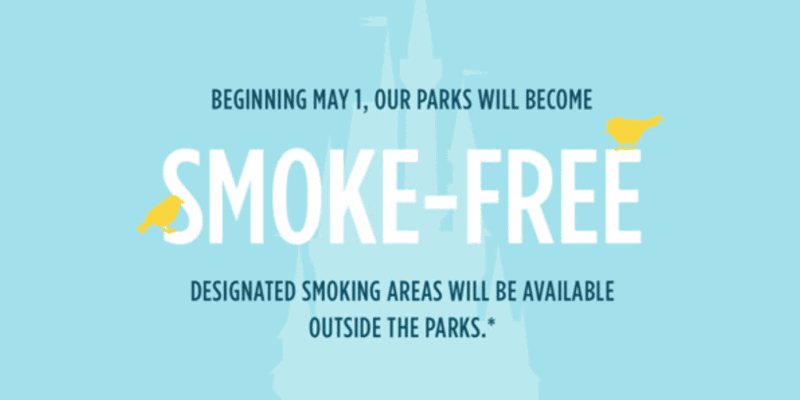 If you’ve been following the latest in Disney Parks news, you won’t be surprised to hear that Disney has banned smoking in all of its U.S. theme parks. The smoking ban, originally announced in March 2019, officially begins this May. Here’s what you need to know.

Here’s what Disney had to say about the smoking ban in the March announcement:

TIP: Designated smoking areas will be available outside the entrances of the areas listed above and at Disney Springs in Florida. For guests who have room or dining reservations, smoking areas are also available at Disney Resort hotels.

After Disney announced the ban on smoking inside the U.S. theme parks, the company was met with mixed opinions. While many guests shared that they were happy to know that the theme parks were finally becoming smoke-free, others took to social media and the Disney Parks Blog to share their distaste for the new policy. No matter which side you’re on, keep in mind the new designated smoking areas will be in effect this Wednesday. If you’re planning a Disney visit and in need of a smoking area, be sure to ask a Disney Cast Member if you are unsure where the appropriate smoking area is.

What do you think of Disney’s new ban on smoking on the theme parks? Let us know in the comments!