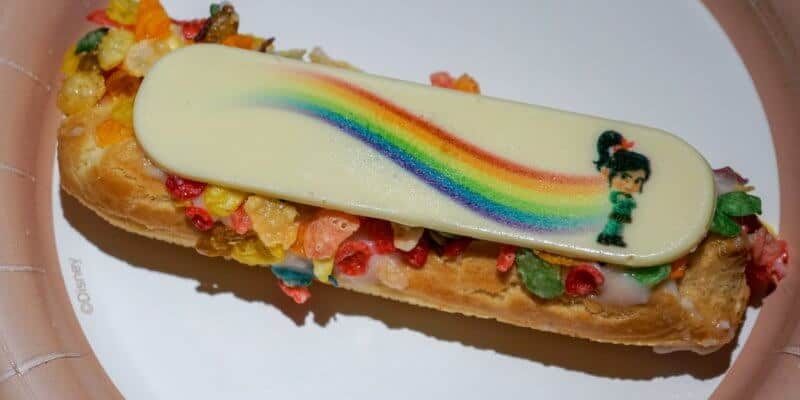 “Wreck-It Ralph” fans, start your engines because one of Walt Disney World’s sweetest and speediest treats has just returned! First premiering in December at Mickey’s Very Merry Christmas Party, the Vanellope Eclair has just returned for another lap at Magic Kingdom.

The fan-favorite eclair is filled with decadent pastry cream and topped with a colorful Vanellope white chocolate topper. The pastry also includes fruity rice cereal speed bumps to slow you down and add a little crunch.

This scrumptious sugar rush can currently be found at Gaston’s Tavern in Fantasyland at Walt Disney World’s Magic Kingdom for $5.99.

The quick bite isn’t the only “Wreck-It Ralph”-themed sweet in the fast lane at Walt Disney World. Earlier this year, we saw the premiere of Vanellope’s Ice Cream Sundae at The Plaza Ice Cream Parlor on Magic Kingdom’s Main Street, U.S.A.

The dessert is served in a championship souvenir plastic trophy, which can be taken home as a reward for finishing the towering sweet treat.

Fans of Beaches & Cream at Disney’s Beach Club Resort may be familiar with the Kitchen Sink, which closely resembles this limited-edition sundae.

To get over to Magic Kingdom to try this sweet new treat, be sure to book your trip with our friends at Academy Travel. As an Authorized Disney Vacation Planner, this company is super knowledgeable of the Walt Disney World parks and can help you with FastPass+, Advanced Dining Reservations, special or seasonal events, discounts, and so much more. Best of all, when you use Academy Travel to book your vacation, you don’t pay any extra fees or commissions.

Click here for a no-obligation vacation quote from Academy Travel!

The featured image on this article is courtesy of our friend @Bioreconstruct on Twitter.

Are you going to race over to Magic Kingdom to get your hands on the Vanellope Eclair? Let us know in the comments below!

Comments Off on Start your engines! The Vanellope Eclair is taking another lap at Walt Disney World