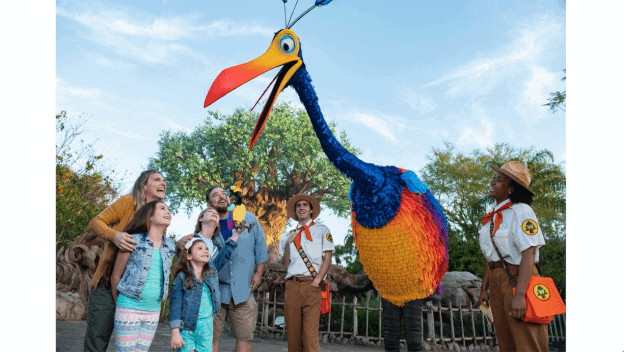 Explorers, be on the lookout — Kevin, the exotic bird from Disney-Pixar’s “Up,” has started roaming around Disney’s Animal Kingdom!

Disney shared this first look video of Kevin, who was spotted on the park’s Discovery Island. Kevin is out and about in Disney’s Animal Kingdom today, Monday, February 11, walking amongst guests and pausing for the occasional photo opportunity.

While you can’t take an exotic animal like Kevin home as a pet, you can bring home a small plush version of Kevin. Starting in mid-February, this cute Kevin plush arrives in select merchandise locations in Disney’s Animal Kingdom, such as Island Mercantile and Discovery Trading Co.

Disney-Pixar fans were first introduced to Kevin in “Up,” when Russell discovers her during his adventures. Russell names her “Kevin,” though it’s later revealed that Kevin is a female with three babies. Kevin also appears in the Pixar short film “Dug’s Special Mission.”

Be sure to keep an eye out for Kevin on your next visit to Disney’s Animal Kingdom! With her towering height and brightly colored feathers, she’s definitely hard to miss.