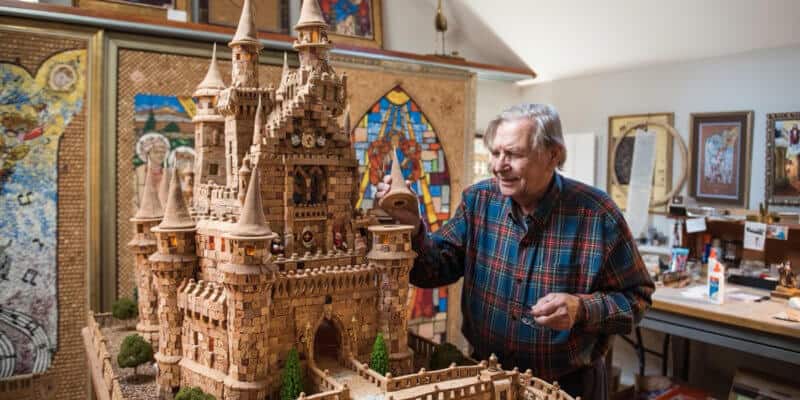 A Huntingdon Valley retiree created a little Walt Disney World magic on his at-home workbench with the help of 7,300 corks, a Swiss Army Knife, an 8-inch carving knife, a butcher knife, sandpaper and admiration toward one of the world’s most iconic dreamers, Walt Disney.

According to The Inquirer at Philly.com, Walter Deuschle, a retired chef-turned-artist, has just recently finished his latest creation after nearly two and a half years of work. Standing at 40-inches high and 56-inches wide, Deuschle has created a cork replica of the Cinderella Castle in Walt Disney World’s Magic Kingdom.

The Inquirer at Philly.com reports that the replica is made of more than 7,000 all-natural corks that have come together to create three stories of ornate details, including towering turrets, elaborate stairways, and an entryway with a patterned floor. The castle also contains lighting strategically wired into the castle that illuminates its spires and interior walls, which are decorated with hand-painted sheets of Plexiglas that resemble stained glass.

Upon looking even closer at the replica, through the castle’s windows, you can see some hidden elements Deuschle placed inside. These elements include images of Cinderella, the Seven Dwarfs, and Mickey Mouse.

The Inquirer at Philly.com reports that this is Deuschle’s most complex cork project to date. It’s a project that was completely inspired by his admiration of Walt Disney and his creations of immersive worlds.

“I like the concept of Disney World, where people go and enjoy themselves. The adults become children, and the children just eat it all up,” says Deuschle. “Walt Disney had a vision that goes beyond our comprehension, and I simply wanted to create something with it that I could share with others.”

“He grew up during the Second World War,” says Deuschle’s wife, Mary. “There was no childhood for him like we have here, and my thinking is, this is part of what he missed. It’s also likely why Mickey Mouse remains such an icon for him. He didn’t have the chances and experiences that kids have today.”

Deuschle first came to Philadelphia in 1956 from Stuttgart, Germany, to work as a chef for the company that eventually became Aramark. During his years with the company, Deuschle was able to move up the ladder and eventually become the manager of a country club before retiring 25 years ago. This was when Deuschle first picked up the cork-carving hobby.

According to The Inquirer at Philly.com, Deuschle’s latest creation of the castle is not his first time creating the iconic structure. Over 20 years ago, after Deuschle took a trip to Walt Disney World with his 4-year-old granddaughter, he created a castle out of sugar.

Deuschle had kept an image of this creation and several years ago, it just hit him. “I woke up and realized I should do it again with corks,” says Deuschle.

According to The Inquirer at Philly.com, Deuschle’s work with cork came about from his collection of corks for local Boy Scouts, who were using them to make trivets. After the scouts discontinued the activity, he was left with hundreds of them, which he turned into paintings, wood sculptures, and other endeavors.

“I enjoy painting, but for me, painting is copying. You put your personal feelings in there, but with cork work, it’s this completely adventurous experience,” Deuschle says. “It’s something I do without guidance.

The Inquirer at Philly.com reports that when it came to constructing the castle, Deuschle’s only template came from a photo. He drew a loose blueprint on paper, then began laying out the foundation, informed only by intuition and past creative projects, including other cork buildings.

When asked what was next for the artist by The Inquirer at Philly.com, Deuschle said that he already has a new cork project in mind but wishes to keep it secret until the idea comes to fruition. In the meantime, Deuschle plans to show the Cinderella Castle replica at several locations yet to be determined. If it’s meant to be, he says, that list will include Disney World’s Magic Kingdom.

Deuschle says that “Disney reached out about the sugar [castle] when I first created that, but it was just too fragile to transport… This one is far more structurally stable, so we’ll see.”

What are your thoughts of this amazing cork castle? Let us know in the comments below!

Comments Off on Amazing Cinderella Castle recreated entirely from cork!