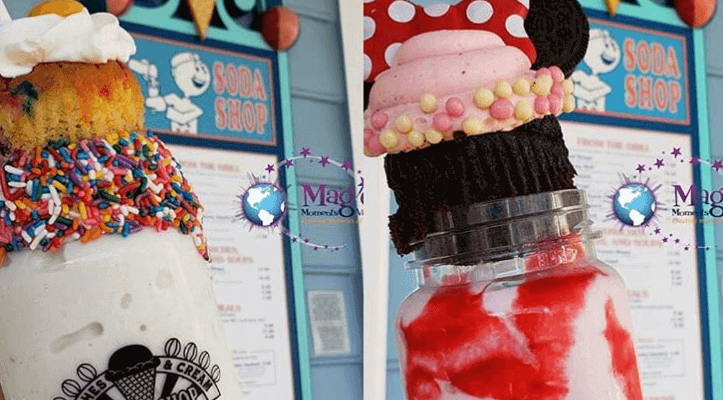 Walt Disney World is stepping up their dessert game with new swoon-worthy milkshakes, and we’re melting over them. Beaches & Cream Soda Shop, the fan-favorite retro-themed diner located at Disney’s Beach Club Resort near the BoardWalk, just began serving up over-the-top, decadent milkshakes, and social media is buzzing over them. Scroll through to see how these extreme milkshakes are taking the internet by storm.

I love a pretty milkshake! These new milkshakes at Beaches and Cream look so cute! Too cute to drink!

The new Beaches & Cream milkshakes are available in the three classic flavors: vanilla, chocolate, and strawberry. Though on the menu they may not sound too special, take a look for yourself. Each milkshake is served in a large plastic jar and stacked sky-high with toppings, including sprinkles, cupcakes, and frosting. And, much to Disney guests’ delight, the jar these shakes are served in is actually a souvenir cup that you can take home. How awesome is that?

Each milkshake is also served with a large paper straw, although many Disney guests have suggested using utensils and sharing the milkshakes with more than one person. When shared, this is the perfect dessert. But if you take this milkshake on alone, it could definitely be a meal in and of itself. We think the perfect way to enjoy Beaches & Cream is to grab one of these milkshakes to go and sit on one of the many picturesque benches on Disney’s BoardWalk to admire the scenery nearby.

These Instagram-worthy milkshakes aren’t the only extravagant desserts available at Beaches & Cream. This old-timey soda shop is known for serving up desserts that are not for the faint of heart. The Kitchen Sink is a well-known challenge in Walt Disney World, and it’s highly suggested that at least four people attempt it.

Everything including the kitchen sink and a whole can of whip cream (a whole can?¿?) yes a whole can. ?#diabeteswithaspoon #EVERYDISNEYWORKERSOADORABABLE #WDW #beachresort

The Kitchen Sink sundae contains scoops of vanilla, chocolate, strawberry, cookies and cream, and mint chocolate chip ice cream, topped with every topping available at Beaches & Cream (including cupcakes, brownies, and an entire can of whipped cream). Bring your family or friends to Beaches & Cream if you’re up for this challenge…and then go back to your resort for a well-deserved nap.

And for those of you with dietary restrictions, not to worry! These extreme milkshakes aren’t the only desserts on the menu. You can still purchase a regular milkshake, and Beaches & Cream even serves vegan options, as well. The vegan milkshakes at Beaches & Cream are still served with the souvenir cup, so you won’t be missing out if you go with the dairy-free dessert option.

These also aren’t the only photo-worthy desserts being served at Walt Disney World. With the recent trend, adorable food options are popping up now more than ever. Take a look at these other desserts here.

What do you think of the new Beaches & Cream milkshakes at Walt Disney World? Let us know in the comments below!