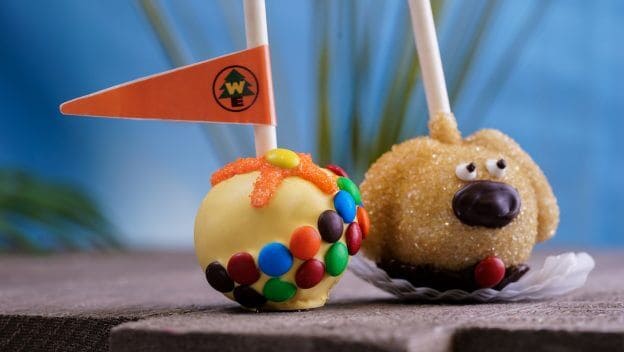 Everyone knows Disneyland Resort offers plenty of tasty treats – including churros, Mickey pretzels, Mickey ice cream and much more – but with Pixar Fest in full swing and Pixar Pier recently opened, there are even more mouth-watering options.

Disney released two videos today providing a behind-the-scenes look at how some of their delicious Pixar-inspired treats are made. The first gives a look at the “Up”-inspired Dug and Russell chocolate cake pops.

These delicious Dug and Russell cake pops can be found at Candy Palace on Main Street, U.S.A. at Disneyland park.

If those don’t do it for you, check out the Pixar Ball cake pop and Pixar Ball apple. Covered in yellow chocolate and decorated with sugar and fondant accents, these sweet treats are sure to make you bounce over to a Disneyland candy shop.

Pixar Fest began back in April and will continue to run from now through September 3, celebrating all of the beloved characters and stories of Pixar with experiences like “Together Forever – A Pixar Nighttime Spectacular,” “Paint the Night,” and “Pixar Play Parade.”

Have you tried any of these Pixar-inspired treats? Let us know in the comments below!

Comments Off on VIDEO: How Pixar Fest’s tantalizing treats are created at Disneyland Resort