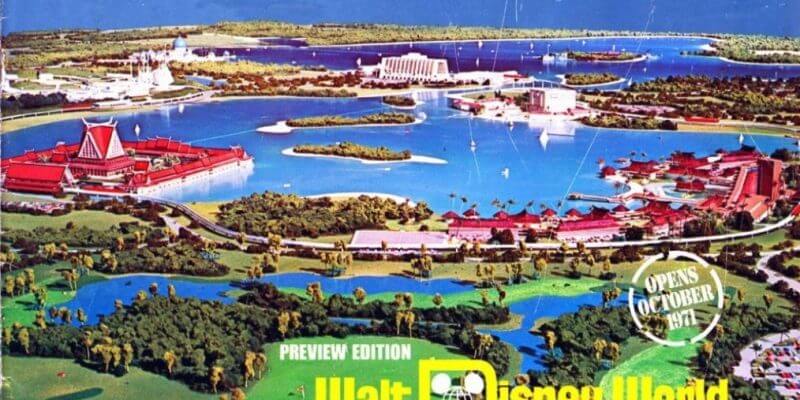 When Walt Disney’s second theme park was established in 1971 it was originally intended to be the only theme park on the sprawling 144 acres of land Disney purchased in central Florida.

In October 1971, Walt Disney World opened with two major hotels along the monorail track. However, plans included adding additional areas to spend the night along with the Polynesian Village Resort and Contemporary Resort. Those, and a few other hotels that evolved from the same plans, never materialized. The Florida project was supposed to include Walt’s vision for EPCOT, an experimental prototype community of tomorrow.  This futuristic vision of a utopian city eventually morphed into the theme park we know as Epcot today (though, when it opened it did retain the original EPCOT name and some of the same spirit). As most of the development was intended to be where the Magic Kingdom was constructed, and near where the new city was being planned, future hotels would be located near these areas.  Several of these structures saw some semblance of planning but all were eventually scrapped.

Early plans for the Walt Disney World Resort included a total of four resorts around the Seven Seas Lagoon, along with two facing Bay Lake.  Two of these, The Contemporary Resort Hotel and the Polynesian Village Resort, opened with the Magic Kingdom in 1971.  Monorail tracks would be used to tie all of the resorts to the theme park. Imagine floating to your hotel room in a gondola. That was part of the plans for this Italian inspired resort that was to be the third hotel along the Seven Seas Lagoon.  The towering centerpiece would have been a 120-foot tall replica of a tower similar to one found in Saint Mark’s Square. A rendition of that same bell tower can now be seen at Epcot, in the Italian pavilion.  Similar to shelved plans to have guests enjoy gondola rides through Venice, the resort would feature the experience to deliver guests to their rooms. The topiaries along World Drive would have to find a new home if the hotel was installed as planned, on the land located between the Contemporary Resort Hotel and the Ticket and Transportation Center.  Had the hotel been completed there would have been a stop along the resort monorail track for this Italian inspired incarnation. Remember this concept, it would be revisited several yEARS down the road.

Disney’s Contemporary Resort Hotel was supposed to have a northern neighbor. Persian palaces inspired the 24-foot dome that was to be the centerpiece and home to shops, dining and check-in.  Similar to the Polynesian, rooms would be housed in buildings bordering the main hall. Unique to this property would be a monorail track spur which would glide through Tomorrowland in the Magic Kingdom. Persia is known today as Iran and Mohammad Reza Shah Pahlavi, the Shah of Iran, allegedly offered to help finance the white and blue color schemed resort. Unfortunately, political changes in Iran in the late ’70s ensured this would never happen. Thailand provided much of the inspiration for this grand hotel that was to be built on the shores of the Seven Seas Lagoon. Even before the park opened plans for this paradise appeared in promotional material for the new Florida project. Inspired, in its layout, by the Polynesian Village Resort, the 600 room Asian Resort would also include a convention center and have a station connecting it to the circular circuit connecting the Polynesian, Contemporary and Magic Kingdom via monorail.  The construction that planned to take place three years after the Walt Disney World Resort opened never occurred as intended. The site, which was cleared and visible along the monorail track for some 17 years, eventually became the Grand Floridian Resort and Spa. Of Men, Mice and Plans

These first three “lost” resorts owe their demise to changes on the world stage which brought about a decline in tourism and travel in general. The two oil embargos plaguing the 1970’s took travel to an almost complete standstill. Gas shortages meant people were not driving for fear of not being able to find fuel. Automobile arrival was the main method of transportation at the time when visiting the Walt Disney World Resort. The decline in visitors and dollars shelved plans to proceed with these potential palaces. Expansion and changes in the overall plan for the resort also contributed. With the EPCOT experiment now a theme park, and a third gate (Disney-MGM Studios) on the way, there was now a need to spread out hotels around the property instead of concentrating them near the Magic Kingdom and EPCOT Center. An extra star was almost born, or rather the desire for one. Though plans for the three properties listed above were not realized, elements of the Venetian Resort were polished and “plussed” to produce prospects for an even larger vision. Near the end of the twentieth century, Walt Disney Resort was growing again.

To feed this fever for expansion, the island of Greece would take the place of Venice, on a much grander scale, or so it hoped. Since the Grand Floridian Resort and Spa was only a four-star hotel, Disney hoped to turn the Mediterranean Resort into a crown jeweled, 5-star destination. Unfortunately, the swampy side of the Seven Seas Lagoon proved to require more work than the company was willing to invest. To this day only an empty plot of cleared land holds its ground where the majestic Mediterranean Resort was once planned to prevail. While none of these creative concepts have arrived at the Walt Disney World Resort in Florida, it would be unwise to assume they never will. Mickey Mouse and his Imagineers have been known to dig into the “forgotten” files to dust off old plans as hopes and needs change for an ever-growing resort.