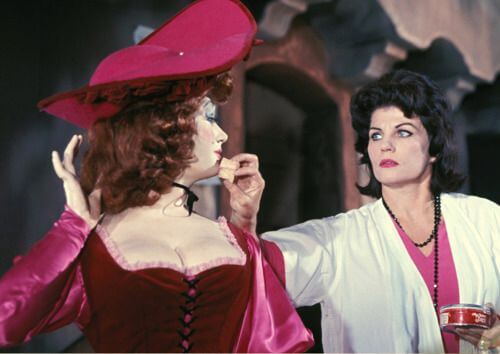 The past couple of weeks have seen a few controversial change announcements for Disney’s theme parks. The one making the most noise has been surrounding the “Bride Auction” scene in Walt Disney’s classic ride: Pirates of the Caribbean.

The scene which has become a staple of the ride with its memorable quote “We wants the Redhead!” is now being transformed to where the Redhead will now take charge in forcing settlers to surrender their goods with a rifle in hand and auction off those goods to lesser pirates. This change has caused an uproar among fans of the ride, among those being classic Disney purists, those who want to preserve the “historical integrity” of the ride, and those just against the idea of a mogul like Disney presumably kowtowing to political correctness.

Now, the uproar is understandable. Nobody wants to see a classic staple of their favorite ride—which has been there since the ride opened—be completely altered, especially simply to appease an angry, PC-happy peanut gallery who have probably been to the parks personally only a fraction of the times as they have. There’s a deep connection, and almost a sense of ownership with these fans, and that has to be understood – not agreed with, just understood.

But, if approached correctly, this change has nothing to do with political correctness, or distortion of history, and is keeping with the traditional ideas of Disney as well as the Pirates of the Caribbean franchise.

For starters, let’s state the obvious real quick that Disney is far from politically correct. One only needs to visit their stereotypical tales of Princes and Princesses of the Magic Kingdom to see that. But that’s okay. This unapologetic dedication to a story and its characters is essential to creating the highest level of immersion and consistency, and Disney is by no means relinquishing that dedication to its story with this change simply to make some political statement. Because there was no original statement to begin with. Like everything else about Disney pirates, this scene was a way to convey a presumably objective fact about pirates through a lens of frivolity.

Disney has never carried much historical accuracy. Yes, we have the grayish brown stripe running along Liberty Square to remind us all of the awful sewage system back in America’s earliest days, but the rest of Disney’s historical integrity falls away behind the period clothing, and architecture. But where Disney lacks in historical accuracy, it makes up for in romanticization. We’ve seen this in classics like Pocahontas and Mulan, and the Pirates of the Caribbean franchise is no exception to this.

After all, it uses goofy, freedom-seeking anti-heroes going up against an overbearing monopolizing police state to romanticize a swashbuckling era of thuggish anarcho-capitalist sailors who journeyed from port to port partaking in crime after crime including pillaging, and plundering, and—as the “Bride Auction” scene suggests—kidnapping and human trafficking. But why does the romantic view of such a salty Black Market have to only be favored for boys?

The reality is there have been legendary female pirates in the past. According to history.com, these epic women included Anne Bonny and Mary Read.

This fearsome duo earned infamous reputations sailing throughout the Caribbean in the early 18th century with a real life Captain Jack: “Calico” Jack Rackam. (They themselves have been reimagined in the TV show Black Sails.) This coincidental connection to the franchise alone is enough to include strong, swashbuckling women.

We’ve seen Pirate Fairies, and we’ve seen strong women taking the lead in the Pirates of the Caribbean franchise from the elegant Pirate King Elizabeth Swan to the dedicated star-gazer Carina Smyth. This franchise was based on the ride, and that ride has evolved with the franchise. So with the female pirates in the movies, it makes perfect sense to add at least one woman pirate.

Now with this in mind, here’s a proposed compromise that could retain some of the scene-in-question’s classic feel: The Redhead is trying to run her auction. As she’s calling out the confiscated items, the drunken pirates across the water start chanting “Nah! We wants the redhead!” and she fires her rifle and shouts something like “Pipe down ya bilge rats!” and continues her auction.

If the updated scene were to play out in this way, we wouldn’t lose the classic line and the gorgeous Redhead is still able to become the strong female pirate she deserves to be, taking power in her own hands to shut up the would be “cat callers,” evolving to a higher level of Disney park icon.

Looking at it this way, this change isn’t fueled simply by political correctness, but rather tends towards Disney’s focus on the romantic side of history with its strong, free and fun-loving men AND women. That doesn’t seem so bad, does it?