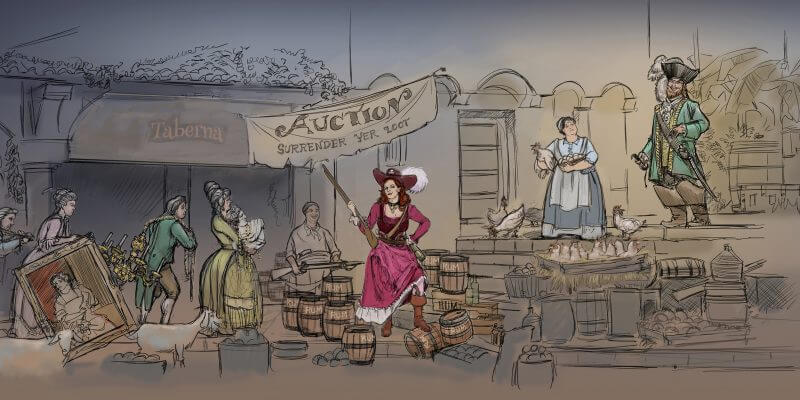 This past summer we learned that one of the most famous scenes in Walt Disney’s iconic theme park attraction Pirates of the Caribbean— namely the Bride Auction– would be reworked into a new animatronic setpiece, one that empowers the Redhead character rather than subjugating her. And now we now precisely when that change will take effect at Walt Disney World.

The official ride refurbishment schedule for Magic Kingdom, which has now been update through the spring of 2018. indicates that Pirates of the Caribbean will shut down on Monday, February 26th and will then reopen on March 19th– giving Imagineers several weeks to install the updated scene.

The new tableau will retain many of the same characters from the Bride Auction, but cast them in different roles. Instead of auctioning off captured women, for example, the Auctioneer will be selling goods, furniture, and chickens stolen from the townspeople. The changes have already been implemented at Disneyland Paris, and will also take place at Disneyland in California at a date yet to be revealed.

Whether you’re happy about the changes or not, Disney theme park fans now have two dates to remember: Sunday, February 25th (the final day to hear “We wants the Redhead!” in its original context at Magic Kingdom) and Monday, March 19th (the first day to see the Redhead become a pirate herself).