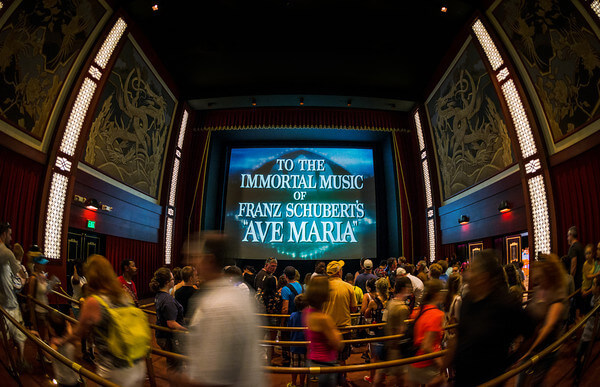 When Disney’s Hollywood Studios theme park– then known as Disney-MGM Studios– began admitting guests in the summer of 1989, it was designed as Walt Disney World‘s preemptive strike against competition from Universal Studios Florida (which opened about a year later), but it was also part of a larger late-20th-century trend of crafting love letters to the movies. And now, as moviegoing as a pasttime enters its waning years, the park’s main-event opening-day attraction that perfectly encapsulated that idea is shutting down in order to make room for something else entirely.

The Great Movie Ride was originally planned for EPCOT Center until Walt Disney Imagineering President Marty Sklar and Disney CEO Michael Eisner decided it would make for a strong enough attraction to anchor an entire park around, and indeed its facade did wind up as Disney-MGM Studios’ centerpiece. A near-exact replica of Hollywood’s Grauman’s Chinese Theatre acted as the entranceway to the ride, and celebrities visiting the park were invited to inscribe their autographs and leave hand- and footprints behind in the cement. The ride represented the park’s thesis statement and perfectly captured the spirit of what Disney was striving to accomplish in its coming battle with Universal- to provide guests with a way to immerse themselves in the movies they loved and to convey the same magic and transportive nature that film had for almost a century at that point. Like all of Disney’s theme park attractions, The Great Movie Ride was an escape from the everyday world, but it was also a tribute to the legacy of Hollywood, and to the grand tradition of movies that helped pave the way for theme parks to exist in the first place.

Cut to 2017. Movies are a dying art. I say that knowing full well how controversial a statement it can be. But I also say it with confidence and experience in the field. For almost a decade I worked as a film and digital projectionist at one of the most prestigious movie theaters in Los Angeles. I witnessed the death of physical celluloid film as a medium first-hand, and I somehow managed to jump ship before the entire concept of theatrical moviegoing becomes a thing of the past.

When cinema was invented, it didn’t have much in the way of competition. For entertainment around the turn of the 20th century, you could read a book, go to a live performance, or if you were really lucky you could go out and enjoy the burgeoning craft of filmmaking. Think about it: during the period when moviegoing first began to catch on, most people didn’t even have a radio in their homes, let alone a television or a computer. A hundred and twenty years later, the average American life is overflowing with distractions, often literally in the palms of our hands. We can watch movies (and TV, and YouTube) on our phones now with a flick of our thumbs. The movie theater has become an extravagance, an indulgence largely saved for the biggest superhero blockbusters or the latest entry in the Star Wars saga.

And bear in mind this is all without mentioning the disruptions that are now found far too often within said movie theaters. When my fiancee and I saw “Spider-Man: Homecoming” this week, we considered ourselves lucky that there were only two people texting in the middle of the auditorium. What good is escaping into a movie if we won’t even let the experience divert us from our own lives for two hours? It’s a bit troubling to me that going out to a movie used to count among my absolute favorite things, and now I’m waiting patiently for the day when the major studios embrace the direct-to-VOD model of distribution. Home theater has become cheaper, more comfortable, and (shockingly) less distracting than movie theaters themselves.

Not to mention the fact that multimedia has replaced monolithic cinema as the primary method of consuming a visual story. In order to fully appreciate something like the current Star Wars renaissance, fans must ingest hours upon hours of television episodes, dozens of novels, video games, and a good number of comic book series. The movies are almost ancillary to the big picture. And when Star Wars: Galaxy’s Edge opens in 2019 at both Walt Disney World and Disneyland, it will further drive the point home that full immersion is the way of the future. We don’t want to look at movies (or even movie scenes depicted by lifelike animatronics) from the outside anymore. We want to walk among them. We want to be a part of them.

This all speaks to the decline of romanticization of moviegoing as a sacred thing and leads me back to why The Great Movie Ride’s time has passed. I still enjoyed the attraction when I visited Walt Disney World once again this past April, but it had started to feel like a dinosaur– a relic of a time elapsed. I had a recurring thought as I rode past scenes from “The Wizard of Oz” and “Singin’ in the Rain” and “Casablanca”: It’s hard to remember a time when people felt this way about movies, or even when movies were differentiated from other forms of visual entertainment.

In a way it’s almost appropriate that the ride being shut down next month is housed in a recreation of the most famous movie theater in the world. It’s a metaphor for the end of an era, and if the Chinese Theatre facade and its footprints remain at Hollywood Studios, they will surely serve as a wistful epitaph to a different age.

So, in just a couple of weeks, fans will gather at Disney’s Hollywood Studios to say goodbye to yet another beloved attraction. And not too long from now Walt Disney World will welcome Mickey & Minnue’s Runaway Railway, a sure-to-be-state-of-the-art replacement that will send guests on a thrilling cartoon adventure with Disney’s most famous and enduring character. It doesn’t feel like an unnatural change to me for the reasons stated above, but I still can’t help but feel a little sad that The Great Movie Ride is going the way of the movies.