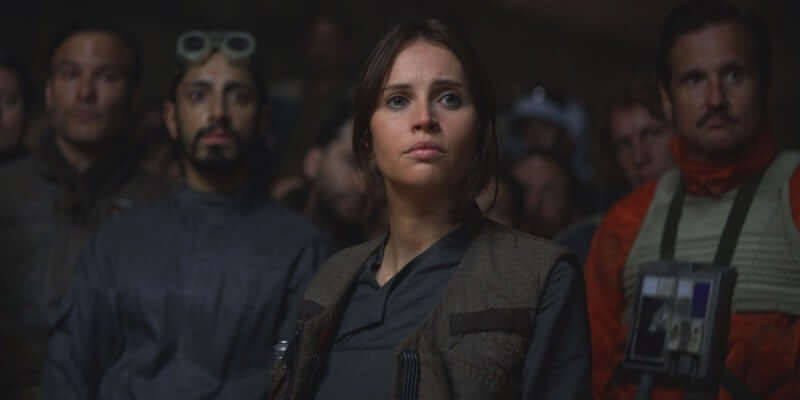 As a pretty big Star Wars fan, I’m happy to acknowledge that Lucasfilm’s new parent company Disney has done a pretty wonderful job so far of reinvigorating the franchise– both in the two theatrical features released so far (“Star Wars: The Force Awakens” and “Rogue One: A Star Wars Story”) and in the new-canon expanded universe of novels, comic books, and television series. However, one area where the company could use just a tiny bit of improvement is in its initial home video releases.

As I wrote about in my review of the first “The Force Awakens” Blu-ray that came out around this time last year, the first home video releases for both of these new Star Wars films have both looked great, but have been a little lacking in the bonus-features department. “Rogue One” once again, contains a little over an hour of extras, but no audio commentary and this time not even any deleted scenes– the latter being especially odd considering this movie has become infamous for being drastically altered during a second round of production.

The behind-the-scenes interviews and footage– cut together into a series of ten short featurettes– are welcome, of course, and they include the following:

Each piece focuses on an individual element from the larger picture of “Rogue One”, such as actor Felicity Jones, the movie’s production design, or the technical process by which Industrial Light and Magic brough Grand Moff Tarkin back to life. The featurettes are well-edited and insightful, and I finished the disc with a better understanding of how the movie came together.

The bonus disc also includes another brief feature detailing some of the many connections between “Rogue One” and other parts of the Star Wars saga, such as Disney XD animated series “Star Wars Rebels” and a number of different films in the series. Most of this won’t be surprising to the die-hard aficionados who picked up this Blu-ray set, but more casual fans will probably learn a thing or two about the hard work the Lucasfilm Story Group is putting in to make sure the entire Star Wars universe hangs together.

As far as technical specs go, “Rogue One” is presented in 1080p High Definition Widescreen with an aspect ratio of 2.39:1. Audio tracks are available in English 7.1 DTS-HDMA, English 2.0 Descriptive Audio, and both Spanish and French-language 5.1 Dolby Digital. Subtitles include English, Spanish and French as well. The Blu-ray set also packs in a spare DVD copy of the movie, plus a Digital HD download so you can easily take “Rogue One” with you on-the-go. I’m sure we’ll be seeing more “Rogue One” bonus features in an inevitable Special Edition re-release of the film sometime later on, but for once it would be nice for early Star Wars adopters to get access to the kind of thoroughly comprehensive behind-the-scenes content that Disney made sure to incorporate into the first “Moana” Blu-ray set last month, for example.

“Rogue One: A Star Wars Story” will be released on Blu-ray and DVD this coming Tuesday, April 4th. The movie is already available to own on Digital HD and Disney Movies Anywhere.

Comments Off on REVIEW: “Rogue One: A Star Wars Story” comes to Blu-ray with a modestly full first release