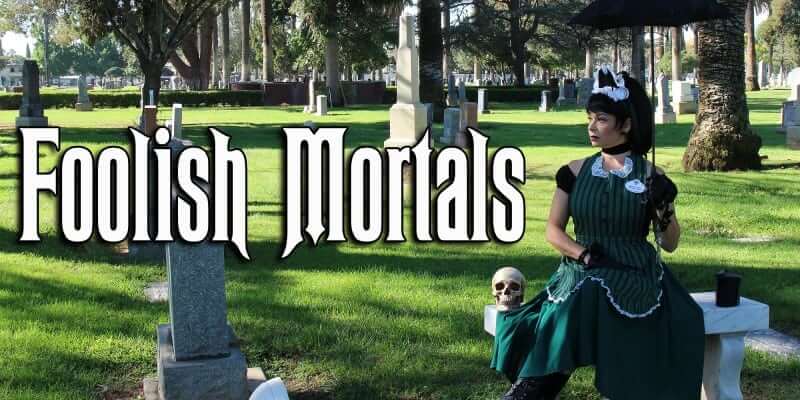 “I would like to live in the mansion, I’m sure like the rest of a lot of fans.”

It was Super Bowl Sunday and I had  immediately back-pedaled on the first moments of my conversation with the filmmakers behind the Haunted Mansion fan culture documentary “Foolish Mortals”. Executive Producer Ryan Grulich and Director James H. Carter II laughed, but it was the kind of playful laughter you’d share with friends.

Or they’re just really polite and I’m trying to twist the narrative to save myself from humiliation. Either way, it was kind.

News of their upcoming documentary about The Haunted Mansion broke on Inside the Magic in May 2016.

Months later, I wanted to catch up with them and see where they were in the process, but clearly, I was a little rusty.

A quick introduction about me before we dive into the main topic here:
A long time ago in a galaxy far, far away, I was a journalist. One of the best things about being a writer is that it provides you with a built-in excuse to get closer to your inspirations. I wrote Haunted Mansion articles for Geek Monthly, Animation World, Haunted Attractions and more.

But that was over five years ago. I’ve only recently returned to full time writing. Grulich and Carter were my first interview back on the beat. I was nervous. (Sidenote: somebody please make a police procedural titled Grulich and Carter.)

Carter immediately chimed in to salvage my sentiment about wanting to live in the Haunted Mansion, “No, no. There’s a lot of people I’ve talked to that would like that,” He runs the Creepy Kingdom podcast. He also works in narrative film production in L.A., as does Grulich.

Carter continued, “What it actually is, is probably not a place anyone wants to live. Fake facades and half rooms. But the way they envision it to be in their heads, yeah. All of us want to live inside.”

Portions of the following in-depth interview have been edited. Mostly the portions where I unproductively ramble about Guillermo Del Toro and Haunted Mansion history for embarrassingly long stretches of time. So let’s get to the (virtually ramble-free) transcripts, shall we?

Practically speaking, where are you in the process of putting the documentary together?

GRULICH: Principle photography is almost complete. It’s been non-stop since July. Post-production [will] be really unique in this film. We have all kinds of concepts with 3D designs that will allow us to work within the framework of the intellectual property without infringing on any copyrights or shooting on Disney property.

We’re going to have some great interviews in the film. The people that are working on this are all really good. The finished product is going to be really exciting for Haunted Mansion fans.

We went in intentionally letting the story be the story. So for that reason, we went into it a little more upbeat than if you were trying to squeeze blood out of a turnip kind of situation.

AUDREY: The genre of fan films has grown so significantly. Trekkies hit in 1997, now you have the Raiders guys who did really well in festivals. You have really tiny documentaries that do well on Netflix. Where do you hope to land on that spectrum?

CARTER: Number one, it’s about the fans. But we also want to present it in a way that you could not know exactly what the Haunted Mansion is. Because believe it or not we live in this world where everyone loves that. But there are people who are like, “You mean that scary house I went into when I was five?”

We want to make sure that people who are not familiar with the mansion can enjoy it. So we’re gonna have some context. But also, for people that really want to sink their teeth into it, we’re really gonna nerd out a little bit. I want it to appeal to both those people.

What James just said is totally true, we’ve talked about this at length and we are gonna have a little something for everybody in there, really engage with the subject matter. Most of the people that want to experience it and have been following it are gonna be fans of the haunted mansion.

But you know what? If their parents are there or their friends are there and they want to be able to expose people to it, they’re gonna get some context and perspective about this little niche of Disney fan culture that you didn’t have before.

Do you have any debut or distribution plans yet?

GRULICH: We’re in that process right now of determining what options are gonna be best for us. We will have physical premieres before it’s distributed anywhere, except for pre-sale video on demand which people can purchase through our website. We are encouraging people to pick up the pre-sale DVDs and help continue to support the film and get their copy first.

Documentaries take a lot of time. How do you plan to keep your fan base engaged and growing during your editing process?

CARTER: To add on to that, I’d like to think that our film and by extension our social media is gonna be a hub for Haunted Mansion fans. Because it’s sort of organically becoming that already.

Why make a documentary about fan culture instead of history?

CARTER: “My decision to want to focus on the fan culture as opposed to [a] peek behind the curtains is that I thought there was a lot of coverage in book form of the history of how it came to be, how they came up with everything. I just found it fascinating how the mansion affected people and inspired them to do things in their personal and professional lives.”

GRULICH: “For me it had a lot to do with [the] philosophical implications…for the population of people who are into [the Haunted Mansion] which we found to be everybody from lawyers and doctors to goth kids and journalists and filmmakers and artists.

There’s just this huge cross-section of people that are into it. There are all these different types of implications that kind of even transcend that interest in the historical part or wanting to live in it. It’s so broad.”

AUDREY: Is the commonality between all those different types of people that you mention, is it a love of gothic horror, is it a childhood memory, what is their most common bond?

GRULICH: That’s really something we’re gonna try to crack with our film. What is it? I’ve talked to so many different people and most of the conversations are not the same.

So everybody has their own fingerprint of fandom. Speaking of fandom, did either of you nerd out at any point in this process to the point where you felt, almost like, you were losing your cool a little bit as filmmakers?

RYAN: Did [we] fanboy all over the place?

CARTER: The person we got for the film that I was blown away about the idea of being able to have a conversation with about this was Rolly Crump, the Disney legend whose concepts were the early iteration of the Haunted Mansion. And literally yesterday, I interviewed him. I haven’t even really talked to Ryan about this.

AUDREY: Okay, I’d love for you to do a little bit of processing out loud, how are you feeling after that experience?

CARTER: As far as losing your cool, I knew going into it that I could not have that frame of mind because the film would suffer. Part of doing a documentary, which I’ve learned, is about making a connection to the people you’re talking to before the camera rolls. So even if it’s a small connection, you want them to feel comfortable enough to be able to say what they have to say.

If you come at them like, “Oh my God, I can’t believe I’m actually talking to you!” people are gonna have their guard up, I would say. My whole approach is like, yeah the camera’s here, that’s fine. So let’s just have a conversation.

GRULICH: I want to jump in on this because I think James is a great interviewer.

CARTER: Well, thank you. On a podcast, you’re carrying the conversation. In a documentary, I’m trying to barely talk at all. Because I don’t want my voice in the film.

Just to give you an idea of this experience, a lot of what we’ve done is, showed up at people’s houses that I’ve never met before, sit down and talk to them. Usually, I’m doing four to six or seven of these in one day. So I’m just driving around Southern California, and Florida as well. I [have to] adapt to my environment immediately. I think that’s how I became comfortable. I mean, I don’t know how interesting this is to whoever is reading this, but…

AUDREY: I think people who are reading this want to know everything. We’re completists when it comes to our Haunted Mansion geekdom. One of the undercurrents of you making a documentary about the Haunted Mansion is that, maybe you didn’t do this on purpose, but it’s kind of a good example to fanboys and fangirls everywhere that you can take what you love and create something with it.

GRULICH: That is literally what our movie is about. That’s what the film is about! It’s this really awesome exploration of how you take something you engage with at the personal level and then how does it translate to your adult professional life?

[I loved] the Haunted Mansion as a kid…well now, I produce over two hundred events a year and I do a lot of effects-based work for live events. [I do] projection mapping and lighting. That’s literally the business that I’m in. And now we’re making a film about it.

It can come full circle. You see that a lot in these interviews. It’s not an isolated incident for James or myself. A lot of people have come full circle and taken this interest they have in the Haunted Mansion and made something out of it in their personal and creative lives as adults. It’s really cool.

AUDREY: We need people to know that you can and should be working hard to translate what you love into more of what you love and creating job opportunities. I know that’s corny, but…

You can pre-order your DVD now and stay up to date about the film’s release at the official “Foolish Mortals” website.