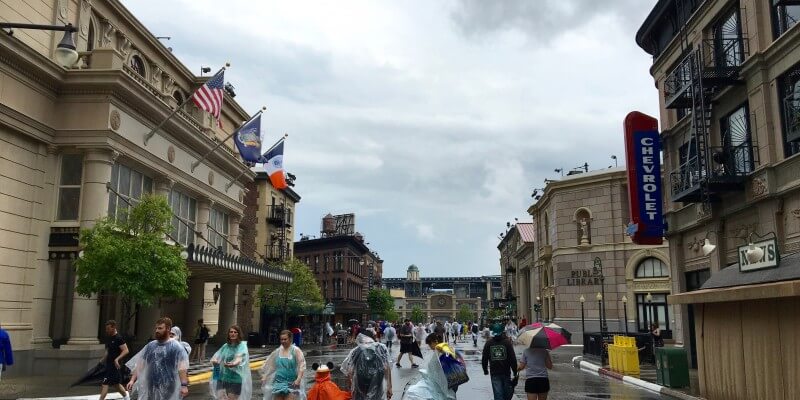 We arrived by the opening time of 9:00am and it was an appropriately bleak day, devoid of any of the sun’s rays but with dark clouds circling around ready to strike instead. Of course, with so much already closed at this park it would make sense that within minutes the line at Toy Story Midway Mania would swell from 35 to 65 minutes. No matter, what was important was to soak up the Streets of America and the remaining Backlot areas on its final day. Sure it was bittersweet, to lament what would be forever gone but at the same time I’m eagerly anticipating what’s to come as construction begins on Toy Story Land and Star Wars Land. The reality was also apparent that there really wasn’t much to do in those areas anyway, with the rain threatening to cancel any remaining shows for the Lights, Motors, Action! Extreme Stunt Show. That didn’t stop a bunch of die-hard fans from arriving about 90 minutes before the final 4:00pm show to pay their respects.

Check out Kevin Yee’s report for a recap and pictures of what went down at the last ever performance there. The entrance to Honey, I Shrunk the Kids Movie Set Adventure playground was also roped off, which didn’t exactly help when I reminded my tearful six-year-old son that all of this area was also closing. (Don’t worry, we explained again what was replacing all of this and he cheered up afterwards.) There was a decent line at the Monsters, Inc. meet-and-greet with Mike and Sulley, with some die-hard fans mixed in with the usual families with strollers. Watto’s Grotto is also a goner, and the cheerful cast members there greeted wayward travelers with a ceremonial crossing of lightsabers at the entrance. Otherwise, it was a leisurely stroll around Streets of America as our shoes and socks got wet but without those incredible Osborne Family Lights it was more of just a simple goodbye than anything else. We were convinced that the Writer’s Shop would also close up shop, but it’s still alive and kicking with some new menu offerings. In the end there was plenty of time to visit Jakku over at Star Tours, go on the Great Movie Ride (which could also use an update), and take in the Indiana Jones stunt show, which disappointingly ended immediately after the first act due to the threat of thunder. Oh well, at least for this particular attraction there will be a next time.

For a photo gallery of what the layout of Hollywood Studios looks like now, check out Corinne’s report from earlier this week.

What will you miss the most of what’s closed and what are looking forward to the most when all the construction will be completed? Let me know in the comments below.