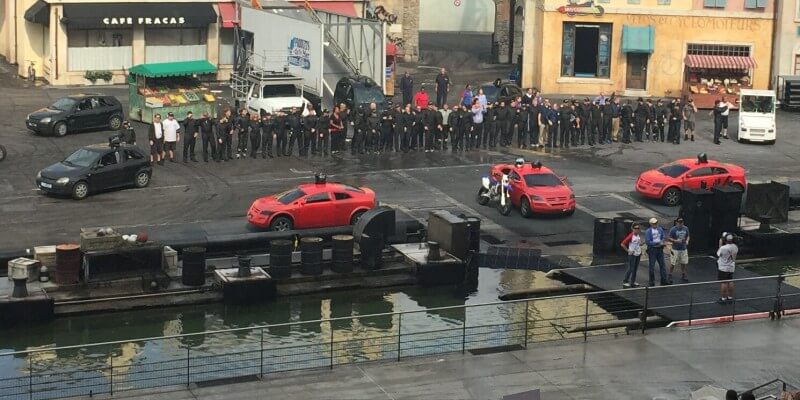 The car stunt show ‘Lights, Motors, Action! Extreme Stunt Show’, which has been at Disney’s Hollywood Studios for more than a decade, recorded its final performance Saturday, April 2 at 4:00pm with a combination of “business as usual” and “fond farewell to the fans”. Earlier in the day, performances had been marked by special deviations–drivers leaning out of cars, even getting out of cars during stunts. The final performance of the day was routine in most respects.

There were a couple of exceptions. The final car stunt through pyro — usually done by lifting a door in the second floor — this time was accomplished by literally smashing through the Styrofoam door. Second, the man-on-fire routine was anything but normal. The man under the flame took it calmly this time, dancing through a few routines, including a moonwalk, before he held up his arms for applause and then collapsed. It was as if everyone knew this was the final-ever performance.

After the show was over, there was a chance to say goodbye to the wider cast via a curtain call. This was emotional enough, but followed by more intimate cast interactions. As the stadium emptied, friends and family of the cast pressed to the front, and soon enough there were few outsiders left. So the cast took it upon themselves to jump into the canal of the stage, dousing themselves in a ritual akin to the Jungle Cruise separation ritual. It didn’t stop there. Friends and family soon spread out a bit more, coming up on stage and exploring the props, the vehicles, and the stage itself. It was highly unusual, but a great send-off for the fans.