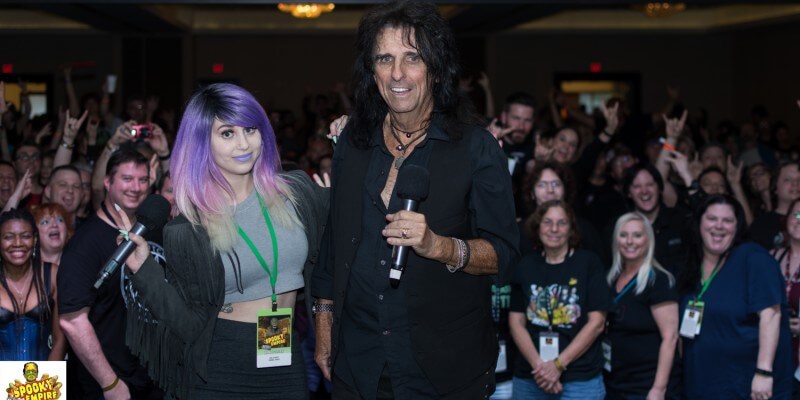 Over the past week OTM examined some of the familiar faces from Spooky Empire (guest Hal Mile’s animation exhibit; Cthulhu campaign; Cupcake Carnage/VIP Cakes and the Coffee Shop of Horrors). Our art director, Adam McCabe produced a fiendishly fun overview video as well.  Now we’ll look back at some of the highlights of this nostalgic horror weekend . . .

This year’s spring event (Spooky Empire has been producing two amazingly fun shows annually), the widely popular horror convention returned to its Orlando roots as the show returned to the Wyndham hotel, which was the site of the first several Spooky shows after the event was moved from South Florida to Orlando.

A return to the traditional zombie walk weekend kick off was also a welcome change from the past two spring Day of the Dead openers. Make up artists from Orlando arrived ready to transform the living into the undead at Uno’s Pizzeria (see our Zombie Invasion story). During the course of the April Fool’s weekend, guests were treated to Q&A sessions with fan favorites like cast members from George Romero’s Day of the Dead along with cast from A Nightmare on Elm Street 4 and rocker Twiggy Ramirez (Marilyn Mansion, Nine Inch Nails, A Perfect Circle). Additional appearances by Goodfellas’ Paul Sorvino, The Sons of Anarchy and Sopranos star Drea Matteo, Godzilla and Ultraman monster actors and the cast of Weird Science (including a rare appearance by Kelly LeBrock) ensured an exciting, entertaining event.

Headlining the weekend’s celebrities was none other than Alice Cooper. Epic pool parties both Friday and Saturday night and a special VIP party (featuring an amazing Godzilla inspired cake by Eric Woller – story here) kept the monsters and zombies rocking all weekend. Of course a vendor room with a diverse selection of horror collectables, make up and movies and an army of skilled tattoo artists provided ample diversions for those not enjoying or taking a break from the guest panels. Returning to the Wyndham was, for the most part, a nice tip of the hat to Spooky Empire’s emergence in Central Florida. The only downside was the poor condition of the allegedly renovated rooms (which has nothing to do with the producers of this fine show, but does reflect poorly on the Wyndam’s feeble attempt at a “high end” experience on I-Drive). However, the familiarity and nostalgia of the convention area (including the added space for a larger panel room) and the paramount pool parties at Gatorville bar were a welcome return to Spooky Empire of days past.

Overall (and mediocre rooms aside), this was an extremely delightful and fang-tastically fun weekend of horror fun. Spooky Empire again knocked it out of the ball park with their RETRO show. A perfect blend of horror, pop culture and the friendliest convention staff around, the event was nothing short of epic. Of note, this show may also mark the end of an era for Spooky Empire, as October’s show will not be a hotel-based event. For the first time in its history Spooky Empire will be moving into the Orange County Convention Center for its October 7-9th Ultimate Horror Weekend. We eagerly look forward to this new chapter in the history of South’s biggest and best horror convention.

Comments Off on Familiar haunts return with Spooky Empire RETRO