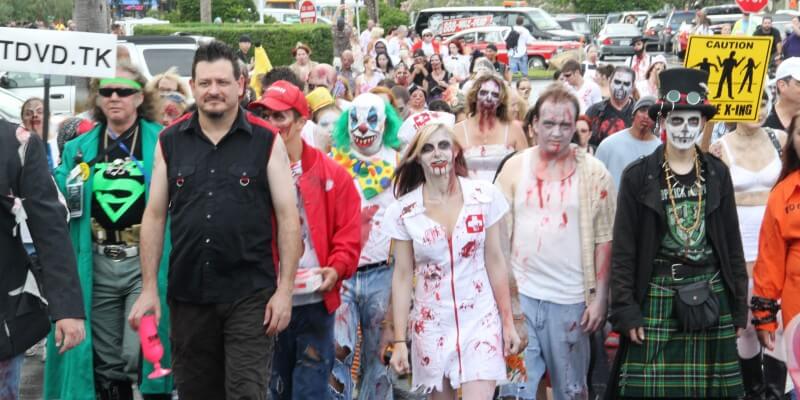 Recent reports and sightings point to a major zombie outbreak, of all dates, the weekend of April Fools!  However this is no joke, the tourist corridor to one of the nation’s top vacation destinations will soon be overrun with walking corpses. OTM has learned that the invasion begins on International Drive at a certain Chicago-style pizza palace.  Not surprising, since Spooky Empire is back in town to host their semi-annual, horror convention (the festivities return again in October). The wild weekend kicks off with a zombie walk at Uno’s Pizzeria and Grill (8250 International Drive Orlando).  Uno’s, the walk’s sponsor, promises prizes, contests and an army of the dead during the Friday afternoon April first event. Make-up artists will be on hand from noon until the 4pm start of the stagger/walk to the Wyndham hotel (which is just up the street at the corner of Sand Lake and International drive) home to the horror convention.  Local legend Nix Herrera (Face Off/Naked Vegas) will be working his make-up magic along with Dr. Skull, Todd Gibson, J.D. (Post Mortem FX), Mandi Schiff and Justin Davis from the Central Florida Face and Body Painters Guild.  The living wishing to be transformed into the stuff on nightmares should arrive early (best times are between noon and 2pm for the opportunity to have professional make up applied. Artists will be there up until the un-dead horde moves out at 4:00. The zombie walk is the traditional opening to Spooky Empire’s weekend of fiendish fun wich includes a Weird Science reunion (with an ultra-rare appearance by Kelly LeBrock), appearances by Alice Cooper, Paul Sorvino and more.  Event information can be found in the recent article from Inside the Magic or visit the Spooky Empire website for details and tickets.   Additional information on the Zombie walk can be found on Facebook.