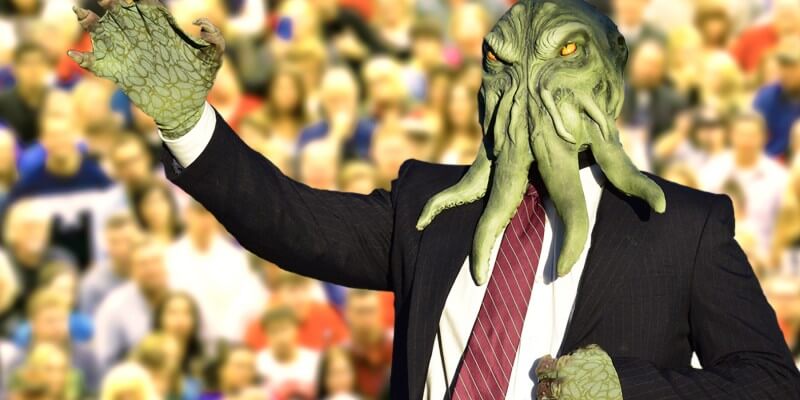 With rhetoric ratcheting up and the mud-slinging of another election year droning on, a third party option seems like a viable alternative.

America is tired of corruption and weakness in the White House — and all other parts of government. You crave strong, dominant authority and that is why I am proud to announce my independent candidacy for President of the United States of America. -Cthulhu

According to recent poll by Miskatonic State University College of Mathematics, the green-tentacled Presidential hopeful is holding his own against the other top Democratic and Republican candidates. The Cthulhu for America website also claims that no issue is too small and encourages voters to tweet their concerns and issues to @cthulu4america.

For more details on this Presidential alternative option and to be a part of the madness, visit the Cthulhu for America website and Facebook pages.
(which were a source for the information and many of the images in this story) Recently several Florida followers showed up an Orlando horror convention to spread their word of despair and promote their candidate.  Fortunately OTM managed to walk away with shred sanity after interviewing the black robed followers:

Why do you feel the Ancient One the best choice for Orlando?
The Elder God Cthulhu should be an obvious choice for anyone living in Orlando. He will devour us all and in doing so will rid the city of so many problems. Taxes wouldn’t just be lowered, they’d be eliminated. Traffic on I-4 would be a thing of the past! What other candidate can deliver that?

What prompted the organization to campaign at the Spooky Empire zombie walk?
Normally we would stay away from an event with mindless zombies, as most of them poll as die-hard Trump supporters. However, Sppoky Empire’s Zombie Walk is an event that attracts a wide variety of visitors. We saw it as an opportunity to reach out to those people and teach them the facts about the great Cthulhu’s campaign.

What’s next for the local group?
Of course we’ll be watching the campaigns of all candidates closely in the upcoming months to see if any opportunities arise to spread the word about Cthulhu’s impending and inevitable reign. And come October, as the election is in the home stretch, we will be back at Spooky Empire’s October convention to rally the faithful and encourage people to get out and vote.

Finally, their high priest presented us with this letter:

We, the fervent members of the Cthulhu Cult of Central Florida, believe that Orlando is the only logical choice for the Dread Lord’s revival. The ancient city of R’lyeh is clearly located off the coast of central Florida. Nothing else explains the breadth of insanity permeating the Sunshine State. What else explains people paying thousands of dollars to wait in lines for hours to shake hands with a tiny man in a mouse costume? Nothing but the fever dreams of a devouring God could account for the daily news articles that feature Floridians shattering business windows with rosary beads, trying to buy BMWs with food stamp cards, or getting arrested for drug possession while wearing a shirt that says “No, Seriously, I Have Drugs.” Now with the election looming merely months away, the insanity is evident as people actually profess that Trump, Hillary, Bernie, or Ted could lead this Great Nation. The madness is palpable.

From now until Election Day, The CCCF will be working to usher in America’s Last President.

Participating in Spooky Empire’s Zombie Walk was a great success! It is a logical combination of like minds. Zombies eat people. Cthulhu eats people. Also, since we will undoubtedly be eaten first, shambling with zombies gave us a chance to see some people be eaten. Think of it as hors d’oeuvres before the Great Banquet. It gave us a chance to mingle, pass out cookies, and meet others who may be eaten first. Although much of our machinations remain necessarily behind the scenes, we can confidently announce we will have a significant presence in October at Spooky Empire’s Ultimate Horror Weekend. In the event that Lord Cthulhu chooses to rise during the event, we ask that everyone be respectful and wear makeup that is non-toxic and gluten free.

As always, may you be eaten first. A truly evil gimmick – yummy cookies with NO milk! Comments Off on Amidst the madness, a new Presidential candidate emerges