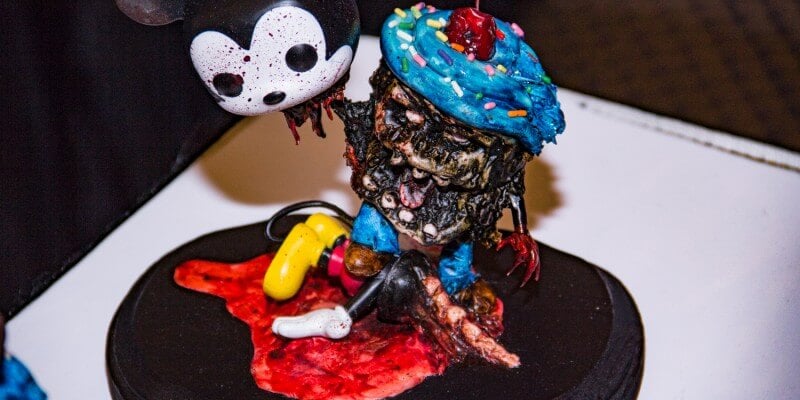 We first met Eric Woller at the 2011 Spooky Empire Convention in October.  His multi-layered confectionery tribute to Freddy Krueger and Nightmare on Elm Street was the centerpiece of the convention’s VIP party.  Eric, and his wife again worked their magic the following May when Bruce Campbell visited for Spooky Empire’s Mayhem; this time with a sweet rendition of scenes from Army of Darkness. OTM caught up with the Wollers at Wyndham hotel in Orlando (as they were preparing yet another masterpiece for Spooky Empire – giant sized Godzilla themed cake).

How did you get started doing these epic cake creations?
With a fabrication background and Ace of Cakes was on at that time…and thought wow…I’m a artist…and cake is just another medium to work in..so we taught ourselves…I started using Facebook to market us I guess….and then the cake competition shows saw my structure and adding props to cake…that’s when it took off..I did three episodes on TLC and an episode on Food Network Challenge…which are no longer on…but you can find them on Netflix….and they usually show our Food Network Halloween Ghost Story Cakes on the week of Halloween. From Ace of Cakes to Monster creations for Spooky Empire’s legendary VIP parties – how did you manage that?
I was trying to build my cake portfolio and needed a reason to build a big cake so we contacted Freakshow film fest (the horror themed film festival that was taking palce at Spooky Empire) about doing a cake for them a few moons back…Petey and Gina saw it and contacted us about doing them for for for their Spooky VIP parties….and cake history is made! What inspired you to take on these giant tributes?
There are a few reasons why I do the cakes as big as I do, and one being that I like to push the boundaries of cake that hasn’t been done before. And Spooky gives me the freedom to do that!  I really like the WOW factor for the VIP party and giving it a special touch for the Spooky family.  And the other is pushing myself to try and out-do the other cakes I have done. It is difficult because each theme is different, so the details is what makes the difference. But all in all they have their own touch. Aside from the majestic masterpieces we’ve seen at Spooky Empire, what else has the Woller family been up to?
I am presently working on a comic book series called Cupcake Carnage and its about a crazed baker who comes up with/injects a homemade toxin into the cupcake, so once the person takes a bite, it turns the cupcake into a cupcake zombie and the cupcake bites back and ripping you apart.  They are stories about some not so nice clients that we dealt with, and I have always wanted to be a villain so being the creator and artist I made myself one. I sculpt cupcake zombies out of an armature and fondant, paint with food coloring, and top it off with real sprinkles and a dehydrated cherry and spary them with a urethane sealer. I sculpt each one so there is no two alike and never will be.

I also have started a new line called Funkolicious…which Pop Vinyl figures are my biggest competitor at conventions so my cupcake zombies now take out the pop vinyl, guts and all..lol. . . and yes there is a possibility we may be doing an episode for Food Network Cake Wars…just have to wait and see…and there is a good possibility with the cottage law in Florida we may start doing cakes again from home…keeping it small.

What’s next for the Woller family?
We will be attending Space Coast Nerd Fest April 16th and 17th and then artist alley at MegaCon May 26th-29 and then Tampa Bay Comic Con August 5th-7th.

Comments Off on From Cupcake Carnage to Cake Master, Eric Woller delights fans with over the top creations