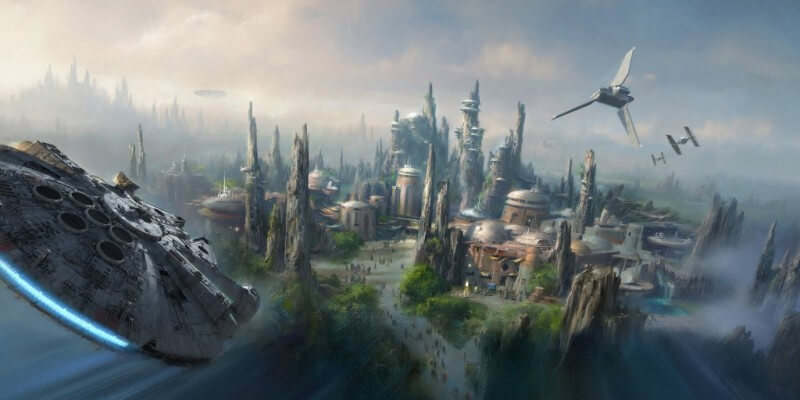 With the release of “Star Wars: The Force Awakens” behind us and the new year right around the corner, it’s time to turn our attention to the next major event in Disney and Lucasfilm history: the construction of Disneyland’s major Star Wars expansion, scheduled to begin January 11th.

That’s right: Disneyland Guests now have less than two weeks to enjoy certain attractions before they are shut down either permanently or temporarily to make way for the upcoming 14-acre addition to the northwest corner of the Park.

The Los Angeles Times put together a detailed map this week showing the Park as it stands today and how it will be affected by the Star Wars construction beginning in January:

With that in mind, partnering with the official information released by Disney, let’s go through each attraction that will be affected by the construction and discuss the historical context and long-term impact the changes will have on the Park.

The following attractions will be shut down permanently on January 11th (meaning that the day before, January 10th, will be their final operating day in Disneyland history):

Big Thunder Ranch, located along the backside of the Park between the Rivers of America and Fantasyland, opened in 1986 and is home to a walk-through log cabin, a small petting zoo with several different animals, and a seasonal holiday theming during different parts of the year.

An all-you-can-eat barbecue experience with live stage entertainment, the Big Thunder Barbecue was also closed down from 1998 until 2009, when it reopened into its current state.

An expanded theme area adjacent to Bug Thunder Ranch, the Jamboree has been home to holiday stage shows, character meet-and-greet areas (including Santa Claus at Christmas and “villains” during Halloween time) assorted seasonal fun and games of all types.

The following attractions will be put on hiatus for at least a year during the construction of the Star Wars area, so if you want to see any of these areas, rides, or shows, the next two weeks will be your last chance for quite a while.

Originally called the Santa Fe & Disneyland Railroad, the enduringly popular live steam railway “Grand Circle Tour” of Disneyland opened with the Park on July 17, 1955. It previously closed down for over a year to accommodate the construction of Splash Mountain in the late 1980s and for five months of refurbishment in anticipation of the Park’s 50th anniversary in 2005.

Usually accessible via motorized rafts departing regularly from New Orleans Square, Tom Sawyer Island first opened in June 1956, almost a full year after Disneyland’s original opening date. The island featured labyrinthine caves, forts, and pathways for explorers of all ages and was extensively rethemed in 2007 to “Pirate’s Lair” as a tie-in with the “Pirates of the Caribbean” film franchise.

The two large boats that travel the same path along the Rivers of America, the Mark Twain, and the Columbia, have been operating in Disneyland since the 1950s. The former has debuted on the Park’s opening day. However, it has been rumored (and apparently confirmed on Disneyland’s official Twitter feed) that the Rivers of America will have an abbreviated, altered course once it finally reopens sometime after 2016.

Another attraction that has survived since the early days of the Park, the Davy Crockett Canoes, also traverse the Rivers of America but does not run on a track and is propelled by Guests.

One of the most popular shows in all of Disneyland Resort, Fantasmic debuted in May of 1992 and made use of both the Mark Twain Riverboat and the Sailing Ship Columbia and an enormous 45-foot animatronic dragon Maleficent. The show takes place on the southern side of Tom Sawyer Island, and Guests gather to watch alongside the opposite bank of the Rivers of America. The absence of Fantasmic may be one of the most noticeable changes during this transitional period, as it will free up the usually-congested nighttime traffic in New Orleans Square.

As if that wasn’t enough, the following rides will be closing temporarily on January 11th for reasons unrelated to the Star Wars expansion (either to undergo routine refurbishment or to remove their holiday overlays): Autopia, Jungle Cruise, and Haunted Mansion. “it’s a small world” follows on January 25th for its post-holiday conversion.

There are many conflicting opinions as to the major changes coming to Disneyland very shortly. Some will be very sad to see Big Thunder Ranch go away; others are thrilled in anticipation of the eventual opening of a huge, immersive land dedicated exclusively to Star Wars. Whatever your thoughts may be, keep in mind that Disneyland has been evolving since its opening day and that there’s always plenty more to see and do in the parks as we wait for new experiences to open or for some of our favorites to come back.