The photographs of my childhood visits to Disneyland are littered all about my grandmother’s house in dozens of photo albums and boxes. When I visit I’ll often be introduced to an image I haven’t seen in years – perhaps one of me smiling wistfully next to Esmeralda from The Hunchback of Notre Dame, Rafiki from The Lion King, or some other slightly obscure character from a classic Disney film.

Grabbing a coveted photo with a unique Disney character seems to have taken a backseat to the larger availability of better-known characters – namely the Princesses as well as Mickey and friends.

Yet as a Disneyland lover and face character photo lurker, I have a few ideas for how anyone can snag a picture with an unexpected favorite.

If there is a particular character you have your heart set on the meeting, your first stop should always be Guest Relations – namely City Hall on Main Street, U.S.A. The cast members there usually have the knowledge and/or a list of which characters will be where in the park. They may not be privy to spur-of-the-moment additions to the character roster (occasionally really rare characters will appear in the park on random occasions), but they can provide basic advice that will steer you in the right direction. What with the incredible success of Frozen this winter, it’s become impossible to ignore the enormous line that forms outside the meet and greet cottage in Fantasyland where Anna and Elsa greet guests. This, in addition to the Fantasy Faire which houses the meet and greets for other princesses, makes Fantasyland a one-stop shop for all your photo op needs.

But Fantasyland is rife with other interesting characters – namely the elusive Peter Pan. In my youthful days of the weekly or bi-weekly Disneyland visits, it became a matter of pride to find Peter prancing around the park. Added points were received if you spotted him hob-knobbing with arch-nemesis Captain Hook. Peter is only available for a short time around the early afternoon mainly in Fantasyland or just outside Sleeping Beauty’s Castle on Main Street. Finding him can be quite the search, but he is more than worth the effort. Related: Disney World character dining locations that are actually worth the money

In the afternoon at the Refreshment Corner on Main Street, U.S.A. (the outdoor seating area where a ragtime pianist performs), beloved characters from Disney’s animated films gather for a rowdy game of musical chairs with guests of all ages. The musical chairs game is usually hosted by Alice and the Mad Hatter (of Alice in Wonderland) and includes participation by other popular characters – from Peter Pan and Mary Poppins to villains like Cruella de Vil or the Queen of Hearts.

Keep in mind, this event is not advertised very heavily, so you may have to ask a cast member for more information about specific times – also participation is small, so arrive early and stake your place to get involved. Frontierland may not be the go-to place for character spots, but it seems that as of recently it’s one of the easiest and most tucked-away places to step into your favorite Disney films.

Big Thunder Ranch Jamboree – which sits along the path between the Big Thunder Mountain Railroad and Fantasyland – has the new Character Roundup, where you can meet Robin Hood, mice from Cinderella, and occasionally super rare characters when they are brought out for special occasions. If you’re lucky, you may even spot some other favorites in Frontierland – Pocahontas is not often seen, but I will attest to having met her while wandering past Thunder Mountain. 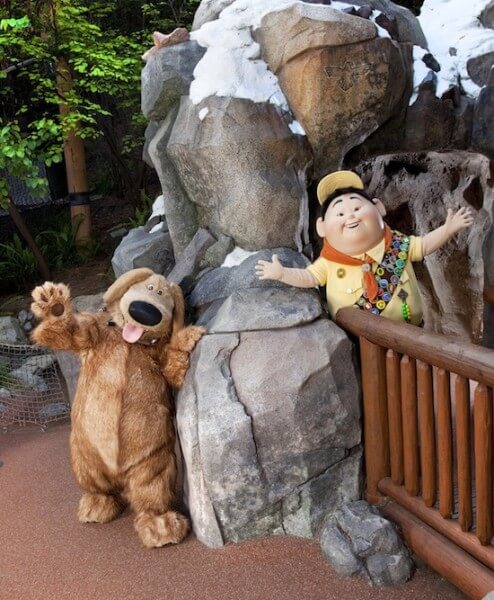 5. Hop on over to California Adventure

While most of the popular Disney faces and costumed characters make appearances at Disneyland Park, California Adventure has its own niche meet and greet opportunities. In the Hollywood Land area, you might spot a character or two from The Incredibles, or a Disney Junior favorite like Sofia the First or Jake from Jake and the Neverland Pirates. Russell and Dug (the talking dog) from Up hang around the Redwood Creek Challenge Trail, and in Cars Land you’ll find interactive meet and greets with the automobile stars from Cars. 6. Visit on a holiday

If you have flexibility in your travel dates, certain holidays can be a great time to visit the parks if you’re looking to meet certain characters. According to cast members at the park, the best time to meet princes from the Disney animated fairy tale films is on Valentine’s Day. Though they are often present in parades, Disney princes very rarely make appearances for meet and greet with guests, which makes this opportunity a special one.

On Mardi Gras, characters from The Princess and the Frog may visit New Orleans Square to partake in the festivities. Mulan may also be a special guest around Chinese New Year. While these spottings may not be set in stone, it doesn’t hurt to consider them when putting together a vacation itinerary. Whether you’re in the parks or researching on the internet, keep yourself alert to find characters. In the past, the Disney Parks Blog has offered fans the chance to pick which obscure characters they’d like to return to the park for a short appearance. And often, if you’re patient, you may run into a character you had no idea you’d meet – and perhaps one that even the cast members couldn’t have anticipated would show up that day. Meeting Disney characters is one of the loveliest experiences of being a Disneyland park-goer. On such a small property, Disneyland gives the incomparable illusion of wandering through the fantasy world of childhood films. And with just a bit of faith, trust, and pixie dust, you will find yourself running into the characters you dreamed of the meeting when you were a youngster.