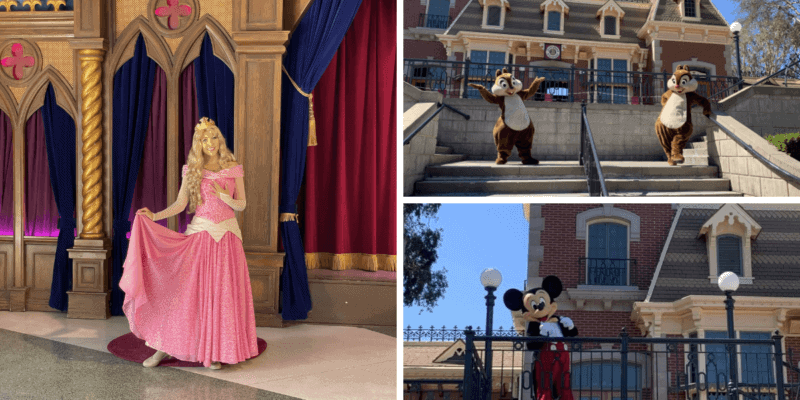 All Images Credit to Inside the Magic

Disneyland has FINALLY reopened! Today is a historic day for the Disneyland Resort, and beloved Disney characters came to celebrate with Guests.

Here is a look at which characters were out magic-making today! Note that although we saw all of these characters during our visit, Guests can also catch other characters in Disneyland Park and even more in Disney California Adventure Park. With these magical character appearances, you never know who you may find at the Happiest Place on Earth!

After Disneyland had been closed for over a year we knew we had to visit on opening day! After braving the long lines early in the morning to enter the park we were happy to see that there were plenty of our favorite characters inside the park to make us feel welcome — It truly felt like they were just as excited as we were to be back!

Guests can interact and take pictures with the characters from a safe distance! As you will see from our photos there are plenty of magical photo opportunities with plenty of characters out in the park. You can read the health and safety guidelines for Disneyland here.

Mickey Mouse, Minnie, Donald, and Goofy were all seen at the train station greeting Guest as they arrived in the park:

You can see even more photos of Mickey and his pals during the opening day of Disneyland here!

Princesses at the Royal Theater, which is just to the left of Sleeping Beauty Castle, gave Guests a royal greeting! Much like at Disney World, the Princesses did not wear masks, but were safely socially distanced from any Guests.

We also spotted Rapunzel with her frying pan in hand over in Fantasyland!

Her Majesty the Queen made an appearance later in the day, too.

We even caught Rey out and about in Star Wars Galaxy’s Edge.

Over in New Orleans Square and Adventureland, we caught Redd the Pirate and Princess Tiana.

We also spotted Miguel from Coco in Frontierland!

In the afternoon, Mickey and Minnie could be seen from their houses in Toontown.

We love seeing the characters out at Disneyland and hope to spot even more return to the Happiest Place on Earth in the future!

What characters are you looking forward to seeing at Disneyland the most? Let us know in the comments!

Want to book a trip to Disneyland? We can help — Click here for more details!

Comments Off on Disney Characters Welcome Guests Back to Disneyland