I spent nearly three years of my career at Walt Disney Imagineering helping develop simulators for theme park attractions, and more than two years of that time working on the original Star Tours, which opened in 1987. It was an invigorating project full of design and story challenges that had to be overcome to make it all work, and on a budget that these days would be hard to believe.

But the most difficult task to overcome was not dealing with the simulator or convincing Industrial Light & Magic’s Dennis Muren that we had to make a film with no visible cuts, making fake commercials for the lobby area, or staying on budget. No, the most difficult task was finding the voice for RX-24, or “Rex,” the droid pilot of the Starspeeder 3000 – the latest in a line of Starspeeders.

I was also the casting director at WDI then and that task fell right into my lap.

Finding the voice for C-3PO was easy. I got the contact information from Lucasfilm for Anthony Daniels (who played and voiced the character in all the “Star Wars” movies and more). Reaching him in London, we quickly agreed upon a deal that brought him to California to record his lines and provide a video guide for programming the Audio-Animatronics figure of the beloved character. 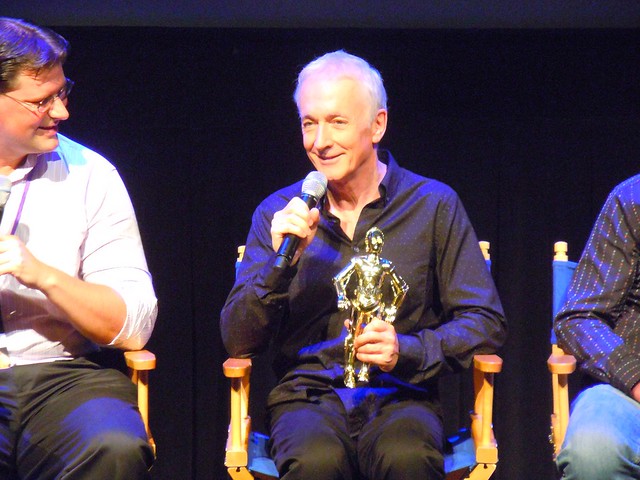 The goose droids in the maintenance area were also easy. One of them was an Imagineer, as were many of the other interstitial voices heard throughout the attraction. I also had to find someone to the flight attendant in the safety spiel seen before boarding. Little did she know that video would play for more than 20 years! (Remember that hairdo?) But getting back to Rex.

Tom Fitzgerald, the show producer, talked with “Star Wars” creator George Lucas and came up with a description of what the voice should sound like – a confident, yet panicky high-pitched voice that should not sound like a robot. Easy right? Nothing could be further from the truth.

First, we tried a couple of voice talents that we used on many projects, as did many other cartoon studios – B.J. Ward and Frank Welker – but no luck. We tried a couple of in-house talents just to get a feel for what everyone was looking for, but it seemed to muddy the waters. Billy Barty was suggested, so I made a deal and he came in to record the lines. We went through more than 20 different people trying out the voice. But none of them seemed to be right.

It was getting a little frustrating, as we were close to needing the final voice for timing and programming purposes. Well, as luck would have it, I went out one night to see “Flight of the Navigator.” It was a really fun film, but what intrigued me the most was the voice of the spaceship. I felt I had found the voice of Rex. I watched the end credits to find out that it was Paul Reubens, better known as Pee-wee Herman.

At work the next morning, I went to Tom’s neighboring office and told him to drop whatever he was doing and go out to see that movie, I was confident that he would hear what I heard. Tom went out that afternoon and came back as excited as I was and immediately told me to “book him.”

I tracked down Paul, who was in production for the first season of “Pee-wee’s Playhouse,” which would gain him some national prominence. I called the soundstage where he was working and ended up talking to him that day. We made a tentative deal that ended up including a pass for him to get into Disneyland and Walt Disney World for as long as the voice was used in the attraction, a point he publicly boasted about at San Diego Comic-Con in 2011:

(That part of the deal had to be approved at a very high level in the company by the way.)

As soon as a day could be worked out, Paul finally came in and recorded the track. It was sent off to George Lucas and approved. Paul had to record a few more times for pickup lines and script changes, but we had our voice. It took around a year to find but would be heard for decades to come in theme parks across the world.

Now, Disney is in the thick of it all over again, surely eager to put an end to the many rumors forming online around “Star Wars: Episode VII” casting. Meanwhile, Rex has been retired to the new Star Tours: The Adventures Continue queue, a prequel version of the ride that debuted a couple of years ago. But fans can still hear a few of Paul Reubens’ lines sputtering from “defective” RX-24 droids now lingering around the attraction. 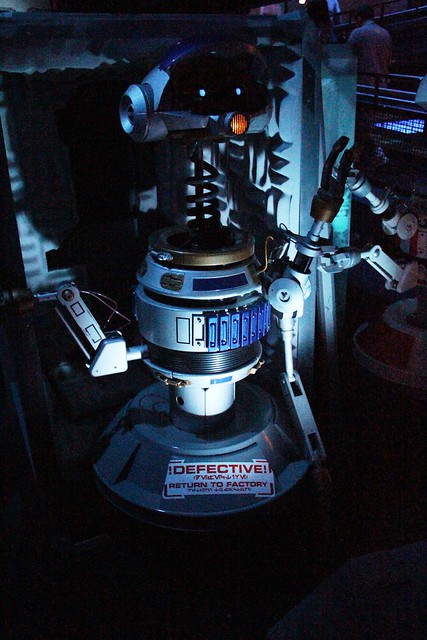 Mark Eades is a former Imagineer and Orange County Register reporter, now sharing his tales of Disney past here on Inside the Magic. More of his work can be found at MarkEades.com.